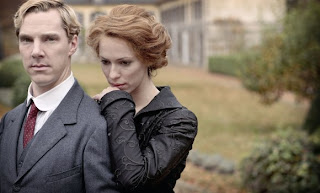 A few pictures from filming can be found here and here.

I felt happy while downloading the BBC podcasts of Life and Fate (more on this in *intended* upcoming posts) but this notice makes me giddy. Well, at least what I imagine giddy feels like after plowing through too much stress.

Tom Stoppard at the BBC's site:

The BBC came to me with the idea of adapting Ford's novel for TV two years ago. I had never read it and I fell in love with it. Parade's End has been my main pre-occupation since then. The title covers a quartet of books set among the upper class in Edwardian England, mostly from 1911 to the end of the Great War. I spent about 18 months on the dramatisation of the novel into five 60-minute episodes, working with the BBC producer Piers Wenger and with Damien Timmer of Mammoth, the independent production company. I confess I feel a bit proud of it, and now that Susanna White [as director] has come on board to direct Parade's End I'm thoroughly excited about it."

More on the cast can be found at IMDb.com as more people join the project. Many thanks to Debra Murphy at Catholic Fiction for posting this information. I'm excited to see how this adaptation works.

Of course, I would have loved to have seen Judi Dench as Valentine Wannop. But this will do nicely...

Update (10 October 2011): see the comment from not Bridget for a link to an interview with screenwriter Tom Stoppard and producer David Parfitt.
Posted by Dwight at 8:35 PM

I definitely will grab it when it becomes available on DVD.

Benedict Cumberbatch as Christopher Tietjens should be fun to watch--my wife and I decided to watch an episode of Sherlock last night and I get more impressed with him the more I see him.

I am looking forward to seeing this also.

Mel, I started to send you an email on this, then decided to post on it instead. Knew you would want to see this!

Dwight, I can say that reading Parade's End was one of the best reading experiences of my life -thanks for posting on this-

Stoppard's involvement is what has my attention. Most promising.

I read Parade's End just after hearing of this production; then went looking on the 'net & found all of you had beat me to it.

Upon consideration, I think reading the whole thing & then rereading more carefully might be the way to go. I've just worked my way through the 4-volume critical edition & enjoyed it even more.

So here's an interview with Tom Stoppard & producer David Parfitt. Sir Tom says it's a serious work but he's incorporating the humor, too. Surely I'm not the only one who guffawed when the odious Sylvia exclaimed "Oh, no, Christopher . . . not from the clubl"
http://blog.mipworld.com/2011/10/interview-tom-stoppard-and-david-parfitt-on-parades-end/

Thanks for the link not Bridget. Interesting to hear them try to describe the book--both "a massive story" and "not much goes on". I fully understand what they mean but anyone who hasn't read the book might have trouble reconciling the two.

And thanks for the comment on the annotated editions--I would love to re-read the book using them since I know I missed many references the first time through.