Apricot Jam and Other Stories: there is queer small substance to this heroism 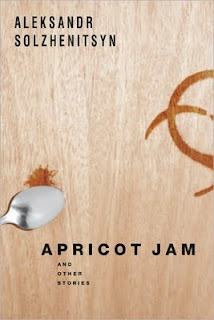 As I mentioned in this post, I ordered this collection of Solzhenitsyn’s short stories and now that I’ve finished the first five (of nine) I better get my thoughts down on paper before I confuse the stories. From the book jacket:

These groundbreaking works—inter-connected and juxtaposed using an experimental method Solzhenitsyn referred to as “binary”—join Solzhenitsyn’s already available fiction as some of the most powerful literature of the twentieth century. With Soviet and post-Soviet life as their focus, these stories weave and shift inside their shared setting, illuminating the Russian experience under the Soviet regime.

The first story, “Apricot Jam,” uses the so-called binary style. Part one of the story is a letter from a kulak (a relatively well-to-do peasant) serving a hard labor sentence to a famous Soviet writer responding to the writer’s claim that “the purpose and meaning of life” as “labor in a communist society” (Kenneth Lantz translated the five stories in this post). “To that I reply that there is queer small substance to this heroism and this labor because it comes from driving people like us nigh to we drop.” The peasant goes on to explain the loss of the family farm to collective agriculture and his current plight—nearly starving to death. He begs the writer for a food parcel while recalling the apricot tree in the orchard and the jam his mother made from the crop. Part two focuses on the famous writer in his posh dacha as he entertains a couple of guests, one a department head at the state publishing house. The writer and department head rival each other in praising socialist realism with such statements as “Creating an art of world significance—that is the task of the writer today. The world is waiting for examples, for architectonics from our literature.” The writer complains that other authors fail to use “the language Russians have been speaking for a thousand years” which he discovered when reading confessions coerced from torture. The writer, after flattering himself with the claim that “When I write, I can comprehend my reader through my imagination, and I can see exactly what he needs”, comments on the peasant’s letter. The writer swoons over the language in the letter but ignores the writer's plea. The symbolism of the apricot jam at the dacha reinforces the disconnect between the writer and his claims.

Another “binary” story,“Nastenka,” follows the difficulties of two different women with the same name of the title. The first Nastenka has a rough life as she tries to eke out an existence as a librarian. Raped often by the men in her life, she takes control of her sexuality and uses it to become the mistress of a war hero with access to material comfort she didn't know was possible. The second Nastenka trains to be a literature teacher. While she guards her sexuality, she witnesses the rape of literature in the name of the common cause. Never quite sure what texts are approved or not, this Nastenka feels gratified when the students respond in an inspired fashion to propaganda. Solzhenitsyn doesn’t need to comment on the insipid poem, just as he didn’t have to remark on a literature student’s passionate harangues decrying the literature of the past.

“Adlig Schwnkitten: A Tale of Twenty-Four Hours” covers a day in the life of a forward artillery brigade as it invaded Germany on January 25-26, 1945. The brigade, extending too far from the main force, is ambushed by the Germans and successfully retreats with minor casualties. In addition to the excitement of the operation, Solzhenitsyn provides a glimpse into the political workings of the army. Political officers from SMERSH (the wartime counterintelligence agency—the book has a handy glossary for many terms, names and agencies) accompany the forces and military leaders would defer decisions on troop movements to them. For political reasons, records of officers contained unexplained gaps and records of brigades ignore heroism shown by commanders. General directives, such as 'no retreat', make sensible options off-limits for officers. How much of the story is a chronicle of Solzhenitsyn’s experience remains uncertain (to me), but I do know that as a commander of a sound-ranging battery he was encircled near Liebstadt and he was able to break out with few men lost.

I hope to get to the final four stories this weekend…

Email ThisBlogThis!Share to TwitterShare to FacebookShare to Pinterest
Labels: Aleksandr Solzhenitsyn, Apricot Jam and Other Stories