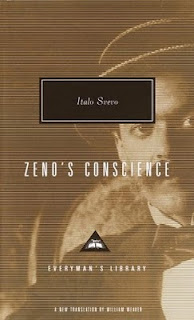 Sorrow and love—life, in other words—cannot be considered a sickness because they hurt.

The fictional autobiography and journal of Zeno Cosini proves to be full of comic contradictions, highlighting his own unreliability. Yet Zeno can be observant and perceptive, although not always at the same time. As he says at one point about his abilities, “For all my efforts I achieved the result of that marksman who hit the bullseye, but of the target next to his.” What gives Zeno’s ‘writings’ additional meaning centers on why he’s keeping these journals: he is following the orders of his analyst, supposedly helping cure himself through this exercise. Except…Zeno thinks psychoanalysis is a fraud and makes him sicker. He resists any help from his analyst while laughing at the diseases ascribed to him. In addition, Zeno believes "A confession in writing is always a lie.” So what are we to make of his book-length confession, the ramblings of his conscience?

In the end Svevo has his character turn on much of what he wrote earlier, all but declaring psychoanalysis a false religion. Fortunately Zeno can declare (and believe in) his innocence and ultimately his health, eventually exercising the freedom he incorrectly believed he had to this point. Even at the end of the book Zeno invests himself in his ultimate passion—confession.

I highly recommend this deceptively simple appearing celebration of an ordinary and convoluted life. There are slow spots, but even they add dimensions to the conclusion. One aspect of its appeal is captured in Joseph Epstein’s review:

Svevo's subject is the weakness of the will, or abulia, and how a dreamy nature has little chance up against the temptations set out by the amazing and obdurate reality of life. In "Zeno's Conscience," Zeno Cosini, an unexceptional Trieste businessman, pits his will against the enslaving habit of smoking, the complexities of courtship, the delights of philandery, the discipline required by business, and loses every time, yet cannot quite be said to go down in defeat.

My posts per chapter: