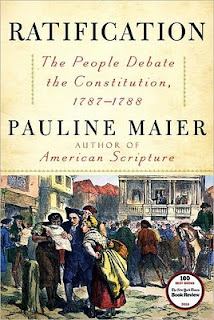 From Simon and Schuster’s page on the book:

When the delegates left the Constitutional Convention in Philadelphia in September 1787, the new Constitution they had written was no more than a proposal. Elected conventions in at least nine of the thirteen states would have to ratify it before it could take effect. There was reason to doubt whether that would happen. The document we revere today as the foundation of our country's laws, the cornerstone of our legal system, was hotly disputed at the time. Some Americans denounced the Constitution for threatening the liberty that Americans had won at great cost in the Revolutionary War. One group of fiercely patriotic opponents even burned the document in a raucous public demonstration on the Fourth of July.

In this splendid new history, Pauline Maier tells the dramatic story of the yearlong battle over ratification that brought such famous founders as Washington, Hamilton, Madison, Jay, and Henry together with less well-known Americans who sometimes eloquently and always passionately expressed their hopes and fears for their new country. Men argued in taverns and coffeehouses; women joined the debate in their parlors; broadsides and newspaper stories advocated various points of view and excoriated others. In small towns and counties across the country people read the document carefully and knew it well. Americans seized the opportunity to play a role in shaping the new nation. Then the ratifying conventions chosen by "We the People" scrutinized and debated the Constitution clause by clause.

Although many books have been written about the Constitutional Convention, this is the first major history of ratification. It draws on a vast new collection of documents and tells the story with masterful attention to detail in a dynamic narrative. Each state's experience was different, and Maier gives each its due even as she focuses on the four critical states of Pennsylvania, Massachusetts, Virginia, and New York, whose approval of the Constitution was crucial to its success.

For the last few weeks I have been listening to the audiobook version of Pauline Maier’s narrative history of the ratification process for the U.S. Constitution and I wanted to say a few words about it in addition to highly recommending it. Maier’s book does not go into great detail on the Constitutional Convention itself so anyone looking for in-depth history on the creation of the Constitution shouldn’t start here. What you do get is the story of most states’ ratification process, from receiving the proposed Constitution through ratification conventions. In addition to the “big names” mentioned in the excerpt above, there were many “lesser” names that provided important contributions and Maier provides mini-biographies on many of them. The repetitive nature, as many states go through similar processes or raise the same objections or provide the same support feels a little tedious at times. Fortunately each state proves to have enough differences to keep the reader’s interest and Maier’s narrative keeps the tension building.

- One of the running “jokes” about ratification centers on the uniqueness of the document and the process. Starting with the Confederation Congress, the question “What are we supposed to do with this document?” gets asked at various stages. Was Congress supposed to endorse the new Constitution? Since the document would dissolve Congress, should they hand it over to the states without comment? For the states, was ratification a simple “yes or no” vote? Could they recommend a second convention to fix perceived shortcomings? Could they make their approval contingent on the adoption of amendments? Or should they approve it but recommend amendments? For states meeting after the requisite nine states had already approved the Constitution (making ratification a done deal), what risks did they run in not ratifying and staying apart from the new union?

- The secrecy rule for the Constitutional Convention, in some respects, slowed the ratification process as many states went through the same topics and arguments that the convention had already dealt with and achieved compromises.

- Support for and opposition against the Constitution did not easily fall into Federalist and Anti-Federalist labels. Feelings toward the proposed Constitution ran across a broad spectrum with the large middle portion, including those that realized it was better than the current Articles of Confederation yet thought it could be improved, proving to be an extremely fluid and changing group.

- While there was (and still is) much talk about viewing the document differently in the northern and southern states and large versus small states, there were many more divisions between and (more importantly) within states such as east vs. west, states with ports vs. states without ports, or territories in states that were scheduled to be a separate state vs. the parent state.

- It’s funny how some political arguments made then have echoes with events now. States that had delegates leave the Constitutional Convention realized they lost leverage on articles they did not like. The time to obtain a compromise, without waiting for amendments, was at the convention.

- It’s fun to watch the progression as the conventions occur. States holding their ratification meetings later in 1788 avoid or adapt tactics and arguments from previous states’ meetings.

- Never underestimate the power of money. The clause on taxation proved to be one of the hotly discussed articles in most states. Even after ratification, Washington (and others) worried about initial proposed amendments attempting to strip the government of the power of direct taxation.

- More publications survive from supporters of the Constitution since access to the press was not equal. In addition (and despite the caveat mentioned earlier on the secrecy rule), supporters generally had a head start because of the delegates from the Constitutional Convention, most of whom signed the final document, knew the document well and had arguments that could be used immediately. Except for the few dissenting delegates from the convention, most people inclined against the Constitution had to wait for publication of the document in order to prepare tactics and arguments against it. Even though most delegates signed the final document, though, there were many that had reservations about the document and suggested amendments before approval.

- Maier downplays the impact that the essays making up the Federalist Papers had at the time of ratification. The impact was mostly limited to New York since the essays were irregularly and lightly published outside of the state. Even within New York, the arguments in the essays rarely swayed delegates before the start of the convention since it was clear that delegates opposing ratification outnumbered those supporting it by more than a 2 to 1 margin. During the state’s ratification meeting, as Alexander Hamilton and others ran through reasons to support the document opponents would cut them off with something along the lines of “Yes, yes, we’ve read Publius.”

- Speaking of Hamilton, Maier describes him at New York’s meeting as grating on the opponents because of his condescending manner and personal attacks (although his work during the convention and his suggestions at the end of the meeting helped ease the way to New York’s ratification). I re-read the chapter corresponding to the ratification convention in Ron Chernow’s biography on Hamilton because I didn’t recall his description in quite the same tone. That's because Chernow didn’t describe him that way, although he thinly veils some of Hamilton’s tendencies for such behavior.

- Sides that best understood parliamentary procedures had a distinct advantage. Rules that were set at the beginning of each ratification meeting had ramifications for approval or defeat. Also, if delegates were late to the opening of a convention they may have undermined their sides’ chances since rules and committees had been set before their arrival.


For anyone so inclined, I recommend C-SPAN’s library video of Pauline Maier speaking about this book. The video is an hour and her enthusiasm for the subject proves to be infectious—my wife walked in during her talk and stayed for the remainder. She quotes James Madison who said if you want to understand the meaning of the Constitution read the state ratifying conventions and not his notes on the Constitutional Convention. She also talks in depth about the differing source materials, including letters from delegates at the ratification conventions. Many of these letters paint a different picture of what the delegates felt when compared to their recorded speeches. Pulling all the documents together for this book provided a great overall picture of America during 1787-88.

I have not had a chance to watch In Depth with Pauline Maier at C-SPAN (it’s three hours long), but I’m providing the link because I would like to return to it when I have more time.