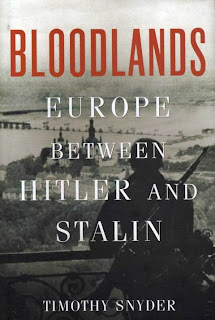 Each of the dead became a number. Between them, the Nazi and Stalinist regimes murdered more than fourteen million people in the bloodlands. The killing began with a political famine that Stalin directed at Soviet Ukraine, which claimed more than three million lives. It continued with Stalin's Great Terror of 1937 and 1938, in which some seven hundred thousand people were shot, most of them peasants or members of national minorities. The Soviets and the Germans then cooperated in the destruction of Poland and of its educated classes, killing some two hundred thousand people between 1939 and 1941. After Hitler betrayed Stalin and ordered the invasion of the Soviet Union, the Germans starved the Soviet prisoners of war and the inhabitants of besieged Leningrad, taking the lives of more than four million people. In the occupied Soviet Union, occupied Poland, and the occupied Baltic States, the Germans shot and gassed some 5.4 million Jews. The Germans and the Soviets provoked one another to ever greater crimes, as in the partisan wars for Belarus and Warsaw, where the Germans killed about half a million civilians. These atrocities shared a place, and they shared a time: the bloodlands between 1933 and 1945.

Snyder’s history looks at the above events, occurring from the early 1930s to the 1950s in the region that falls in the triangle between Berlin, Leningrad and the Black Sea (see the map at the bottom of the post) and attempts to view those events in an interrelated, broader perspective. As Snyder frames it, “In this competition for memory, the Holocaust, the other German mass killing policies, and the Stalinist mass murders became three different histories, even though in historical fact they shared a place and time.”. To put each of the “three histories” in context does not minimize them but shows how the interaction of the three histories influenced each of the others.

Noquar has an excellent review at biblioklept and I have provided numerous quotes in the links below, so I wanted to focus on a few points in Snyder’s concluding chapter titled “Humanity.” Snyder points out Hannah Arendt’s portrayal “of the killing epoch…has endured: of people (victims and perpetrators alike) slowly losing their humanity, first in the anonymity of mass society, then in a concentration camp.” Unfortunately I have not read any of Arendt’s work, but if the overview portrayed is correct then Bloodlands undermines or corrects some of those assumptions. As Snyder points out, Arendt was “extraordinarily knowledgeable within the limits of the available documentation” but more records are available to us today than in her time. He then looks at both systems, noting many of the similarities between the Nazis and Soviets before exploring their differences (not least of which is how fourteen million people could be deliberately murdered in just over a decade).

Snyder also chides the countries and leaders engaged in “competitive martyrology” and some of the results from just such exaggeration. He closes with one of his themes in the book, which I’ve mentioned in an earlier post, stressing the uniqueness of each life in the compilation of these death records. His intertwining of personal accounts and anecdotes in the history of the region moves the action beyond simply recording what happened and provides human dimensions. As I wrote in the post on Chapter 8, Snyder stressed in an earlier chapter

“People were perhaps alike in dying and in death, but each of them was different until that final moment, each had different preoccupations and presentiments until all was clear and then all was black.” It is easy to become numb as the deaths mount and the atrocities worsen, but Snyder restores the humanity to the victims so they are no longer just “round numbers.”

Earlier posts on and quotes from Bloodlands:

Chapter 1: This was the triumph of Stalin’s law and Stalin’s state

Chapter 2: As if he were responsible for neither

Chapter 3: He became a victim of his own creation

Chapter 5: Between thirty-one and forty-five million people were to disappear

Chapters 6 and 7: A deadly competition

Chapter 8: Belźec was not to be a camp...people spend the night at camps

Chapter 9: I thought then of the loneliness of the dying


If you are like me and need maps to help visualize where events take place, here is one of Europe in 1933 (picture source is the The New York Review of Books' review of Snyder's book). 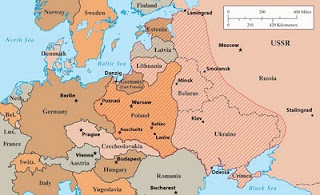 Europe in 1933. The shaded areas are what Timothy Snyder calls the bloodlands. Anne Applebaum writes, 'Between 1933 and 1945, fourteen million people died there, not in combat but because someone made a deliberate decision to murder them.'

Update (8 May 2011): I don't mean for this post to be a comprehensive list for external links on the history of the bloodlands, but I would like to note a recent online addition:

Almost one million Europeans were deported under the former Soviet Union's Gulag system. RFI and the French National Centre of Scientific Research have collected the stories of 120 survivors in the first ever sound archive devoted to the Gulag experience. Here we present a history of the archive, the background to the Gulag deportations, and a selection of portraits of survivors accompanied by previously unpublished photographs.

Update (1 August 2012): Criticism on Snyder's "diplomatic" handling of Eastern European complicity in the Holocaust in David Mikics article “The Diplomat of Shoah History”.

Update (10 Sep 2012): At the National Archives: Records Relating to the Katyn Forest Massacre