The last chapters of Book Three, from Chapters 86 to 116, reflect a change in strategy in the war for Sparta and Athens and Thucydides’ narrative changes to follow the activity. Also, as the war progresses, new characters emerge as significant players in the history. There is a lot going on in this short section so I’m going to focus on just two items. These books cover from the winter of 427/6 BC through the winter of the next year. All quotes come from the Thomas Hobbes translation. 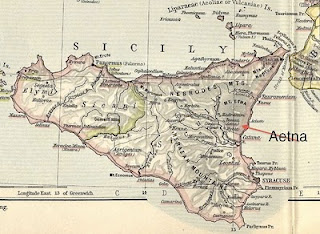 Sicily
The citizens of Leontini on Sicily sent a request to Athens to assist them in their dispute with Syracuse. The Leontines appealed to Athens stating an ancient alliance and to their common Ionic background. Athens responded with their assent, stating their common descent, “but intending both to hinder the transportation of corn from thence into Peloponnesus, and also to test the possibility of taking the states of Sicily into their own hands.” These are pretty extraordinary reasons if true. Cutting off grain importats to Sparta was quite a change in Athenian tactics put in place by Pericles, which focused on defensive tactics around Athens and harassment by the navy around the Peloponnese. Pericles also said Athens should not extend their empire, something the second hidden reason contradicted. But Pericles was gone and the situation on the ground was different, especially after the plague’s impact and the cost of the war accrues. In addition, when Corcyra requested help before the start of the war (Book I, Chapter 36), one of the reasons they gave to Athens was to help Corcyra because of their strategic location: “For it lieth so conveniently for sailing into Italy and Sicily, that it can both prohibit any fleet to come to Peloponnesus from thence, and convoy any coming from Peloponnesus thither: and is also for divers other uses most commodious.” Corcyra was nominally still an Athenian ally but conditions had dramatically changed with the civil strife there. Athens initially sent twenty ships to Sicily, a small number but one the Leontines gladly accepted.

The Athenians set up their base in Rhegium in Italy (the ‘toe’ of the boot), attempting to take Syracuse-friendly islands just north of Sicily. The death of one Athenian general leaves Laches in sole command of their fleet. With the help of allies, he is able to take Messana and controls the strait between Italy and Sicily. Athens and the Sicilian allies invade several cities and islands around Sicily, some successful, some not. Pythodorus arrives in Sicily for the changing of the fleet command from Laches. At the request of its Sicilian allies, Athens agrees to send forty more ships, “conceiving that the war there would the sooner be at an end, and desiring withal to train their men in naval exercise.”

Demosthenes
I am leaving out much in this section, such as Thucydides noting the plague’s return in Athens, volcanic eruptions, numerous earthquakes, and destructive tsunamis (which Thucydides attributes to the earthquakes). Instead I wanted to focus on the first appearance of the Athenian general Demosthenes. I will mention that both Sparta and Athens are using more aggressive strategies, going further afield in their offensive attacks and accepting requests from cities to assist with protection. Much of the following action takes place in the central-west of Greece—locations that can be found close to the notation for the Ionian Sea on the above map.

The Acarnanians asked Demosthenes to erect a wall to secure their city from their enemies. Instead, Demosthenes is persuaded by residents in Naupactus to attack the Aetolians, which he agrees to do because it furthers Athens’ interests. Demosthenes’ plan reflects a bold, aggressive approach, hoping to enlist locals to drive through Phocis to Boeotia. Allies begin to desert him, though, which undermines his plans. Despite the desertions Demosthenes invades Aetolia and meets with victories in his opening battles. The Aetolians had time to regroup, attacking the Athenians and routing them and their allies. “There died very many of the confederates, and a hundred and twenty men of arms of the Athenians; that was their number, and all of them able me: these men of the very best died in this war.” The Athenians retired to their ships at Naupactus and returned to Athens. Well, all returned except for Demosthenes. “[H]e was afraid of the Athenian people for the loss that had happened.” The Athenians proved unforgiving of combat losses, willing to sanction or banish (or worse) losing generals.

Thanks to the Athenian loss, the Aetolians convinced the Spartans to assist them in protecting their region, especially around Naupactus. Demosthenes, staying in the area, arranged for defense of the city with the Arcarnanians (who he had earlier spurned). In a subsequent battle, Demosthenes devises a plan to offset his shortage of men as compared to the Peloponnesian army (which is supplemented with troops from nearby Ambracia). Knowing he will be outflanked, Demosthenes has men lie in ambush, attacking when the opposing troops begin to surround him. The Athenians and their allies rout the Peloponnesian army, causing the surviving Spartan general to request safe retreat for his troops. Instead of announcing the agreement in the normal manner Demosthenes privately agrees to the request, intending to disgrace the Spartans who will appear to slink away from their allies. As Spartan troops begin to slip away, their allies see what is going on and begin to flee as well. Athenian allies, not knowing of the agreement, fall upon the escaping troops and slaughter many of them.

When Demosthenes learns that additional troops from Ambracia are on the march toward to the site of the recent battle, he positions his men for another ambush and some trickery. I’ll let Thucydides tell this part:

And the next morning before day, he invaded the Ambraciotes whilst they were yet in their lodgings and knew not what was the matter, but thought rather that they had been some of their own company. For Demosthenes had placed the Messenians on purpose in the foremost ranks, and commanded them to speak unto them as they went in the Doric dialect, and to make the sentinels secure; especially, seeing their faces could not be discerned, for it was yet night. Wherefore they put the army of the Ambraciotes to flight at the first onset, and slew many upon the place: the rest fled as fast as they could towards the mountains. But the ways being beset, and the Amphilochians being well acquainted with their own territory and armed but lightly, against men in armour unacquainted and utterly ignorant which way to take; they lit into hollow ways and to the places forelaid with ambushes, and perished. And having been put to all manner of shifts for their lives, some fled towards the sea ; and when they saw the galleys of Athens sailing by the shore, (this accident concurring with their defeat), swam to them, and chose rather in their present fear, to be killed of those in the galleys, than by the barbarians and their most mortal enemies the Amphilochians. The Ambraciotes with this loss came home, a few of many, in safety to their city. … For this loss was greater than, in the like number of days, happened to any one city of Greece in all this war. I have not written the number of the slain; because it was said to be such as is incredible for the quantity of the city.

With these victories, Demosthenes returned to Athens. I hope we see more of this character. While Athens sends out small parties around the Hellenic world, Demosthenes appears to be the one general with a vision for winning (or losing) battles in a grand fashion.

Thank you for this outline of the action. I found this section of Chapter 3 more difficult to follow than earlier chapters. I am grateful for your clarification of the different allies.

Glad it was helpful Bill. Good luck on the future chapters!