The Way We Live Now: such weapons as she possessed 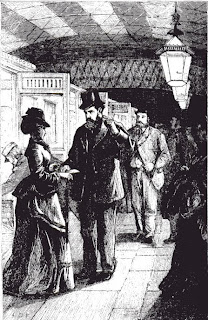 "You, I think, are Miss Melmotte."
Picture source

A reminder for anyone interested in Trollope, The Classics Circuit is underway with a tour of the author. SFP at pages turned has posted a good review of The Way We Live Now. I just finished Volume One so here are a few quotes and comments on Chapters 25 – 50.

I don’t have much to add to my comments in the post on the first half of Volume One regarding themes or topics—much of the second half develops the same areas. I think I do need to clarify the comment I made on the women in the book. Most of them do have a harder life than their male siblings or other family members. The point I was trying to make centers on the strength the female characters exhibit. These aren’t passive, wilting creatures. Even Marie Melmotte strengthens and attempts to elope in this section, very much against her father’s wishes. Regarding marriage “up” or “down”, forging a union across class lines, I would characterize Trollope as agnostic. While the examples of such successful cross-classline unions are limited (Lady Monogram comes to mind), it is the other characters that pass judgment more than Trollope. Is it possible to make such a distinction? I’m going to hold off on that question until I see how the relationships develop. Or don't.

Trollope’s dig at other authors, given through Mrs. Hurtle:
“What I find fault with is that the writers and actors are so ignorant of men and women as we see them every day. It's all right that she should cry, but she wouldn't cry there."

Viewpoint on the changing times (just one of many):
(Lady Carbury thoughts on her cousin Roger): But then dear Roger was old-fashioned, and knew nothing of people as they are now. He lived in a world which, though slow, had been good in its way; but which, whether bad or good, had now passed away.

Marriage:
Nothing perhaps is so efficacious in preventing men from marrying as the tone in which married women speak of the struggles made in that direction by their unmarried friends.

Augustus Melmotte and his influence (explains how he is able to defer payments):
But money was the very breath of Melmotte's nostrils, and therefore his breath was taken for money.

Mrs. Hurtle (probably my favorite character in the book so far—this is just after Paul Montague makes it clear he will not marry her):
She knew it all and was hardly angry with him in that he had decided against her. But treated as she had been she must play her game with such weapons as she possessed.

Trollope on his character Paul Montague:
But they will be very hard on him on the score of his cowardice,—as, I think, unjustly. In social life we hardly stop to consider how much of that daring spirit which gives mastery comes from hardness of heart rather than from high purpose, or true courage.

I found this last quote extraordinary. Is Trollope equivocating on “doing the right thing”, something he has advocated very strongly to date? Paul’s character to date knows what he should do but often lacks the will to carry it through. Paul was seduced by the ready money of being on the board of the railroad, but he is taking measures to find out the legitimacy of the deal. Trollope, after this quote, goes into detail of why apparent weaknesses can occur—“continual aversion to the giving of pain”, “a softness which causes the fretfulness of others to be an agony to himself”. Such considerations do not describe Felix Carbury, who caves on every issue simply because he is weak. But this does describe Paul’s character very well, humanizing him by showing his compassion despite his weaknesses. It also humanizes Roger Carbury, initially portrayed as something of a scold who constantly admonishes and reprimandes other characters. Trollope takes pains to show that beneath Roger’s gruff and proper exterior he anguishes over the pain he recognizes his advice causes but sticks to the higher purpose anyway.

Coming across this quote immediately after positing the question “What kind of moralist is Trollope?” in the previous post was unexpected but perfectly timed. Trollope acknowledges the times are changing but that doesn’t mean ‘right’ or ‘wrong’ are redefined. At the same time, he also recognizes human frailty in dealing with ordinary times but extraordinary events, too. I found this slip of the mask on the author’s part extremely revealing.