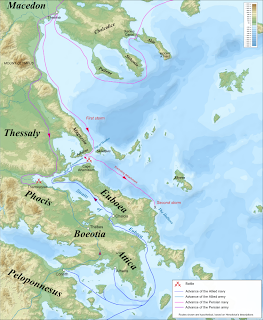 We know very little of Pindar's life. He was born in or about the year B.C. 522, at the village of Kynoskephalai near Thebes. He was thus a citizen of Thebes and seems to have always had his home there. But he travelled among other states, many of which have been glorified by his art. For his praise of Athens, 'bulwark of Hellas,' the city which at Artemision “laid the foundation of freedom,” the Thebans are said to have fined him; but the generous Athenians paid the fine, made him their Proxenos, and erected his statue at the public cost.

(Ernest Myers in the Introduction to The Extant Odes of Pindar. Note that Artemisium is an alternate spelling in other sources.)

For an excellent summary of events leading to the sea battle at Artemesium, as well as the battle itself visit this site. Instead of recapping the action, I will look at a couple of topics that stood out for me in this section (paragraphs 4 to 25).

Themistokles
Themistokles proves to be one of Herodotus’ most complex portraits in The Histories. There is much admiration for Themistokles’ contributions to the Hellenic victory, which included being one of the ten generals at Marathon (not mentioned by Herodotus), convincing the Athenians to build ships with a windfall from their silver mines, and interpreting the Delphic oracle for Athens to put their trust in their fleet. Starting with the battle of Artemesion some bias against Themistokles creeps into Herodotus’ narrative. In the years after the Persian wars Themistocles was hounded out of Greece and eventually ended up serving the Persian court (his later life is well covered by Thucydides and Plutarch). Herodotus’ claim of Themistokles’ accepting and giving bribes have to viewed with the later history in mind—how much did the later transgressions of Themistokles surface in Herodotus’ coverage? Or, as in other parts of The Histories, is he simply reporting what others said?

Herodotus accuses Themistokles of receiving 30 talents (of unspecified metal) from the Euboeans to engage the Persians near their land so they would have time to evacuate their households. In order to accomplish that, Themistokles supposedly bribed Eurybiades (the Spartan commander of the entire fleet) with five talents of gold and Adeimantos (the Corinthian commander) with three talents of silver for both to keep their fleets in the area.

A side note—Greeks that later served the Persian court receive mixed handling from Herodotus. I don’t recall anything bad said about the former Spartan king Demaratos, even when he provides Xerxes with an accurate analysis on how to defeat the Spartans (which Xerxes fails to heed). Themistokles’ coverage proves to be more complex and bears scrutiny for the remainder of The Histories.

Fate/Gods
From the way Herodotus lays out the action, at some point the Persians would have to feel fate was working against them. That point would not have been when the false dream encouraged Xerxes to invade Greece. It probably wasn’t when the storm destroyed the first Hellespont bridge. It might have started to creep in when 400 ships were destroyed in a storm off Magnesia. Even though the army was victorious at Thermopylae, the battle could not have been reassuring to the Persians given the amount of casualties inflicted by a small number of Greeks.

Herodotus reports the Persians deciding to send a large contingent of ships around Euboea, a trip of over 250 miles, in order to trap the Hellenic ships. All 200 ships were lost in storms, although it is possible Herodotus uses this story to reduce the number of Persian ships closer to a believable figure once battle was engaged. It’s also possible events happened as he said, which would have dealt another blow to Persian morale. His comment in paragraph 13 tantalizes the reader: “All this was the god’s doing, so that the Persian side would be equal to instead of much greater than the Greek side.” What really happened?

After the initial skirmish near Artemesion, which was undecided but slightly in the Greeks’ favor, the Persians had to suffer through a stormy night at Aphetai (across a strait from Artemesion) where dead bodies washed up on shore. The omens which the Persians had been wishfully interpreting in their favor (or simply ignoring) can no longer be disregarded and they reacted accordingly: “[T]hey began to panic, expecting that they would be utterly destroyed, so terrible were the adversities that they had by now encountered, for even before they could catch their breath from the shipwrecks and the storm raging off Pelion, they were confronted by a fierce sea battle and after that by torrential rains and might torrents that teemed into the sea with violent thunder.” (from paragraph 12, all quotes and spellings are from The Landmark Herodotus with translation by Andrea L. Purvis)

Despite the bad omens, the Persians were more fearful of what Xerxes might do to them (harkening back to Demaratos’ discussion with Xerxes about the rule of law versus the rule of man) and engaged in the final day of battle at Artemesion. The reader can almost detect a sigh of relief on the Persian side when the Greeks, learning of the defeat at Thermopylae, sailed away to establish a new defensive position.

Propaganda
Themistokles’ action during the retreat from Artemesion was brilliant. Leaving engraved messages on the rocks for the Ionians encouraging them to desert the Persians or stay out of battle as much as possible might possibly cause them to defect in addition to casting doubt on their reliability for Xerxes. Herodotus had previously mentioned the Ionians’ divided loyalty, some “kindly disposed to the Hellenes and were serving in the expedition against their will” while others enjoyed fighting the Greeks. Once again their rightful place in Herodotus’ geography comes into question and Artabanos’ warning to Xerxes to leave the Ionians behind during the invasion begins to look prophetic.

Xerxes tries his hand at propaganda also, inviting anyone who wished to tour the battlefield and view the Greek dead to do so. Before anyone was allowed to visit the site, though, nineteen of the twenty thousand Persian casualties had to be buried first. That way there would be 3,000 Greek corpses in comparison to the remaining thousand Persian bodies. Herodotus says Xerxes’ troops saw through the ruse. Successful or not, leaders on both sides would continue to engage in propaganda for the remainder of the war.