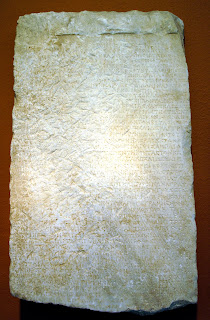 When the allies brought their ships to Salamis, the Athenians put in at their own shore and made a proclamation that every Athenian should try to save his children and other members of his household in any way that he could. Most of them dispatched their households to Troizen, through some sent them to Aegina and others to Salamis. They made a tremendous effort to evacuate everything, not only because they wanted to comply with the oracle, but especially because of the following reason: the Athenians say that a huge snake guards the Acropolis and dwells in the sanctuary, but more to the point, they say that they celebrate a ritual in which they set out an offering of a honey cake every month for it as though it were a real snake. Now before this, the honey cake had always been consumed, but this last time it was left untouched. When the priestess revealed this to the Athenians, they became even more eager to leave their city, believing that the goddess had abandoned the Acropolis. And when they had removed everything to safety, they sailed off to join the naval forces at Salamis.

- paragraph 41. Quotes and spellings are from The Landmark Herodotus with translation by Andrea L. Purvis

Note: this section covers paragraphs 26 through 54 in Book Eight and ends with a look at the Decree of Themistocles or the Troizen (Troezen) Decree.

After the semi-victory at Artemesion, the Greek fleet had to fall back because of the loss at Thermopylae so that the fleet could support the army. Whether or not some Greeks were celebrating an Olympic festival while the Persians were invading, Herodotus uses this device to again show the Persians’ inability to comprehend their enemy: “What kind of men did you lead us here to fight, who compete not for money but for excellence alone?” 'Glory' would have been a nice addition to excellence.

Herodotus paints a bleak picture of intra-Hellenic hatred and squabbling, where cities enthusiastically sign up with the Persians in order to ravage their neighbors. Thessaly assists the Persians in carrying out a scorched-earth attack in the march to Athens, where, among other atrocities, Hellenic women reportedly died from gang rape. The Persian army splits, part of it heading through Boeotia toward Athens while the other section heads to Delphi to plunder the temple. I have mentioned a few of the purposes of the Delphic temple, such as being a diplomatic center in addition to a shrine. The temple would have housed a massive store of wealth received from suppliants, in addition to containing opulent tokens from notable events—for example, winners of battles would send commemorative offerings to mark their victory. Such a store of wealth would be tempting for any army open to raiding a religious shrine. However the temple at Delphi supposedly protected itself—sacred armaments moved on their own accord, thunder filled the skies, and rocks-faces fell in order to save the temple from the Persian forces. In addition, several Persians reported seeing two hoplites, much larger than normal men, chasing their troops.

The Athenians found out the difficulty of benefiting from the coordination of a loose confederation of troops. Instead of protecting Athens, the Peloponnesians fell back to the Isthmus of Corinth in order to protect their lands at that narrow neck of land which would have provided a similar defensive advantage as Thermopylae. The Athenians, however, feel deceived and request the fleet to stay nearby so they can flee. Herodotus makes the decision to flee sound like a last-minute verdict. But in 1959, a farmer near the city of Troizen (often spelled Troezen) offered the stone he had been using as a doorstep to a local display of old artifacts. It turns out the inscription on the stone was a resolution passed by the Athenian assembly for a planned, orderly evacuation of Athens that fit in with a strategic plan of Salamis and the Isthmus of Corinth as the focal points for defense. If this is the case, then the battles at Thermopylae and Artemesion could be viewed only as skirmishes intended only to delay the oncoming Persian forces. I wouldn’t go as far as to say the decree “directly contradicts” Herodotus’ account (as the Wikipedia entry words it) since part of his history is consistent with the decree and previous battles. But it does call into question some of his assumptions and chronology.

Unfortunately, the authenticity of the Troizen decree can’t be conclusively determined. The lettering on the stone dates to the early 3rd century BC, leaving a gap of around 200 years between the events described and the copy of decree. Is it a copy of the original decree? Is it an amalgamation of several decrees issued around that time? Or is it a complete fabrication?

In any event, the Athenians had to flee and regroup while the Hellenic fleet, upon hearing of the sack of Athens, had to decide whether to stay in Salamis or make a stand elsewhere. Themistokles will make another appearance during this debate which will make assessing his actions and motivations even more difficult.