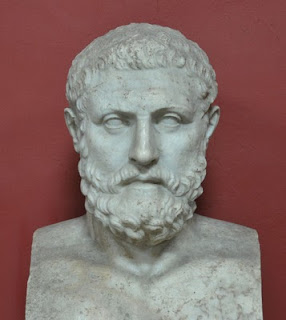 Since I’m behind on writing anything, I wanted to post an excerpt from Book Five of The Histories. This is from the speech of Sokleas of Corinth as he rebukes the Spartans for wanting to return tyrants to Athens. From Paragraph 92:

“After he [Kypselos] had ruled for thirty years and had woven out the final strands of his life, his son Periandros succeeded to the tyranny. In the beginning, Periandros was certainly a more gentle ruler than his father, but after communicating with Thrasyboulos tyrant of Miletus through messengers, he became far more bloodthirsty than Kypselos had ever been. What happened was that he sent a herald to Thrasyboulos to ask advice about how he could best administer the city so as to make his rule as secure as possible. Thrasyboulos led the man who had come from Periandros outside the town and into a field planted with grain. While they walked together through the grain crop, Thrasyboulos kept questioning the herald about why he had come from Corinth, the reason for his arrival from Corinth, and all the while, whenever he saw one of the stalks extending above the others, he would cut it off and throw it away, until the finest and tallest of the grain had been destroyed. Although they went through the entire field in this manner, he never offered a single word of advice, but sent the herald back. When the herald returned to Corinth, Periandros was eager to hear the advice he had requested, but the herald said that Thrasyboulos had given no advice at all, and that he was amazed that he had been sent to a man who was clearly not in his right mind and who destroyed his own possessions; and then reported everything that Thrasyboulos had done.

“Periandros understood the meaning of what Thrasyboulos had done and perceived that he was advising him to murder the prominent men of the city. It was then that he exhibited every kind of evil to the citizens. For Periandros completed all that Kypselos had left undone in his killing and banishing of the Corinthians. And on one day, he had all the Corinthian women stripped of their clothing, for the sake of his own wife, Melissa [whom Periandros had killed while she was pregnant]. He had sent messengers to the Thesprotians on the Acheron River to consult the oracle of the dead there concerning a deposit of treasure belonging to a guest-friend. When Melissa appeared, she refused to tell him about it and said that she would not disclose where it was buried because she was cold and naked and could make no use of the clothes that had been buried with her since they had not been consumed by the fire. She said that the evidence for the truth of her claim was that Periandros had placed his loaves in a cold oven. When her response was reported to Periandros, he found her token of its truth credible, for he had engaged in intercourse with Melissa’s corpse. As soon as he heard the message, he made a proclamation announcing that all Corinthian women were to go to the sanctuary of Hera; and so they went there dressed in their finest clothes as though to attend a festival. Periandros had posted his bodyguards in ambush, and now he had the women stripped, both the free women and the servants alike. Then he gathered their clothes together and, taking them to a pit in the ground, said a prayer to Melissa and burned all the clothes completely. After doing that, he sent to consult Melissa a second time, and her ghost now told him the place where his guest-friend had deposited the treasure. This, then, Lacedaemonians, is what tyranny is like, and that is the sort of deeds it produces.”

(From The Landmark Herodotus, translation by Andrea L. Purvis)