The Last Post and Parade’s End odds and ends 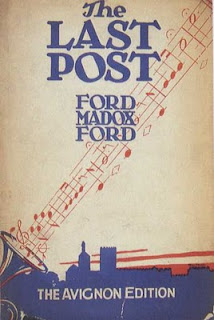 Picture source
(The link has nothing to do with the book, but I thank them for the wonderful cover)

I browsed through the Ford Madox Ford Society’s last online newsletter and noticed in Newsletter 15 (30 March 2009) that "Max Saunders, Joseph Wiesenfarth, Sara Haslam and Paul Skinner are working on an annotated critical edition of Parade’s End (Carcanet)”. It is a work that definitely would benefit the reader.

The Last Post seems to have a controversial standing within Parade’s End. Ford later called it an “afterthought”. The end of A Man Could Stand Up did come to a conclusion, of sorts, on Armistice Day. Although very little resolution was shown, I thought the similarity to a wedding dance in the final scene was enough closure. Ford seems to have wanted more closure at some point, whether in his initial designs, somewhere along the writing of the first three books, or even after A Man Could Stand Up.

Dorothy Parker wasn’t a big fan of The Last Post, saying the book had to be read “with a furrow in the brow. You must constantly turn back pages, to ascertain from inside which character’s head the author is writing.” Anthony Burgess, in a Paris Review interview, commented on Graham Greene’s exclusion of The Last Post in the Bodley Head version of Parade’s End:

Well, the worst example I know of unjustified translation is to be found in Ford Madox Ford’s Parade’s End, where in the British edition, under the imprint of Bodley Head, Graham Greene has taken upon himself to present Parade’s End as a trilogy, saying he doesn’t think the final novel, The Last Post, works, and he feels perhaps Ford would have agreed with him; and therefore he has taken the liberty of getting rid of the final book. I think Greene is wrong; I think that whatever Ford said, the work is a tetralogy, and the thing is severely maimed with the loss of his final book. An author is not be trusted in his judgment of this sort of thing.

I probably should have included Ford’s own comments on literary impressionism at the beginning of these posts, but better late than never:

“The point is that impressionism, whether it be prose, or verse, or painting, or sculpture, is the record of a moment; it is not a sort of rounded, annotated record of a set of circumstances that happened ten years ago—or ten minutes. It might even be the impression of the moment—but it is the impression, not the corrected chronicle.”

Ah yes, but as he shows in this work what happens in a moment may include, with everything else happening, thoughts of what happened ten years ago. Not to mention what happens in that moment, or an accumulation of moments like the war, can alter how you record as well as remember an experience.

I cannot find much of Ford’s poetry online, so I’ll provide a few lines from his poem “Footsloggers” that seem appropriate:

It is because our land is beautiful and green and comely,
Because our farms are quiet and thatched and homely,
Because the trout stream dimples by the willow,
Because the water-lilies float upon the ponds.
…
That we shall endure the swift, sharp torture of dying,
Or the humiliation of not dying.

This is the land that Tietjens’ surveyed and commented on in Some Do Not… and looks like we’ll return to in The Last Post (or so it looks…I’m only one chapter into it). In contrast, between these endpoints, the reader has seen the earth almost consume Christopher Tietjens and members of his regiment during shelling.

The Last Post’s epigraph is the opening of a ballad (one version with updated spelling can be found here). The events commemorated in the ballad are as follows:

To the east of the Weardale `capital' of Stanhope, the River Wear is joined from the north by the Rookhope Burn, which means `valley of the rooks'.On December 8th, 1569, this valley was the setting for a border fray in which a large group of mosstroopers (cattle raiders), from Tynedale, made a raid upon the valley of Weardale. The raiders had decided to plunder the Wear valley for its livestock while most of the Weardale men were away (in Teesdale !), plotting against the Queen in the famous `Rising of the North'. Resistance to the raid was expected to be low, but there were still a number of Weardale men left to defend their dale. The raiders were pursued north into the Rookhope valley, as they made off with Weardale cattle and sheep.When the Weardale men eventually caught up with the mosstroopers, a fray ensued in which four of the Tynedalers lost their lives.

Rockhope stands in a pleasant place,
If the false thieves would let it be;
But away they steal our goods apace,
And ever an ill death may they die!

Ford only provides the first two lines, but the third line seems appropriate for what we’ve seen Christopher Tietjens go through, although the ‘false thieves’ were stealing more than just his goods.

I might have to read the annotated version also-to read the annotations would motivate me for a second reading-I have ordered FMF's last book (I think) The March Of Literature-and 800 page plus history of Lit. and will post on it over time-I hope

Thanks. I'm wishing that annotated version was already available!

I hopefully will finish by this weekend. What a long strange read it's been.