You're showing your age 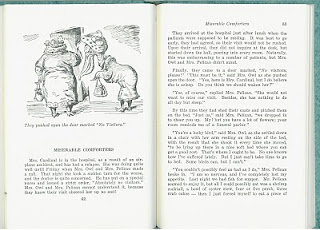 In seeking to stimulate the interest of children and young people in the worship services of the church, through the years I have used a number of ideas for Sermonettes. Just one has succeeded beyond all expectations—“Bird Life in Wington.”

Picture on a stand beside the pulpit a little white cardboard church with steeple and miniature bells—the First Birderian Church of Wington. … Parents seem to enjoy the Wington stories as much as, if not more than their children—often observing slyly that I am aiming over the heads of the children for the grown-ups. But far from objecting, they have not only called for more (which has caused me to prolong the series far beyond my original intention), but have urged that I publish the Wington stories. This little volume is my response to their request.

And now, a cultural artifact, originally published in 1928... 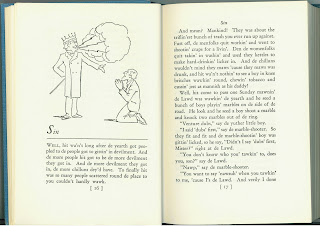 Ol’ Man Adam an’ His Chillun: Being the Tales They Tell about the Time When the Lord Walked the Earth Like a Natural Man
by Roark Bradford, with drawings by A. B. Walker

From an article on "The Green Pastures":

Roark Bradford (1896-1948) grew up on a plantation in Tennessee, where he, a white child, heard many African-American folk stories from the black workers. In 1920, he began working as a reporter, and, according to Encyclopaedia Britannica, “met the colorful characters of various southern cities, including the musicians, preachers, and storytellers on the riverfront of New Orleans.” Based on these experiences, Bradford wrote down a series of African-American folk stories, which were published in the New York World. His first book, a collection of the retelling of biblical stories from among his published works, Ol’ Man Adam an’ His Chillun, was published in 1928. Bradford’s work, however, cannot be considered an accurate or authentic representation of African-American folk culture. As is noted in the Encyclopaedia Britannica, “A major weakness of Bradford’s work is his reliance on stereotypes of his black subjects. Yet his writing accurately reflects their dialect, and his approach is gentle and humorous.”

Email ThisBlogThis!Share to TwitterShare to FacebookShare to Pinterest
Labels: Books, Books for children

Wonderful. I like the illustration for Bird Life in Wington.

Thanks, that's one of the best that I remember.

There are others that I remember better because they hint to what happens next even better, but you'd have to read the whole story to appreciate them. I was surprised to see that the book is still in publication!