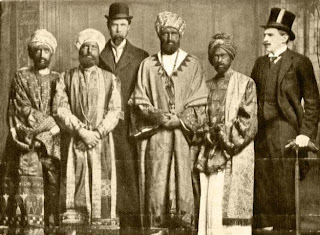 Virginia Stephen (Woolf) in disguise on the far left, William Horace de Vere Cole in tophat on the far right

Something a little lighter for today...

On February 7, 1910, the HMS Dreadnought hosted a hastily arranged tour of four Abyssinian princes, or so they had been told. It turns out to have been an elaborate hoax. From Wikipedia:

The hoax involved Cole and five friends— writer Virginia Stephen (later Virginia Woolf), her brother Adrian Stephen, Guy Ridley, Anthony Buxton and artist Duncan Grant—who disguised themselves with skin darkeners and turbans. The disguise's main limitation was that the "royals" could not eat anything or their make-up would be ruined. Adrian Stephen took the role of "interpreter".

On 7 February 1910 the trick began. Cole had an accomplice send a telegram to HMS Dreadnought which was then moored in Weymouth, Dorset. The message said that the ship must be prepared for the visit of a group of princes from Abyssinia and was purportedly signed by Foreign Office Under-secretary Sir Charles Hardinge.

Cole with his entourage went to London's Paddington station where Cole claimed that he was "Herbert Cholmondeley" of the UK Foreign Office and demanded a special train to Weymouth. The stationmaster arranged a VIP coach.

In Weymouth, the navy welcomed the princes with an honour guard. Unfortunately, nobody had found an Abyssinian flag, so the navy proceeded to use that of Zanzibar and to play Zanzibar's national anthem. Their visitors did not appear to notice.

The group inspected the fleet. To show their appreciation, they communicated in a gibberish of words drawn from Latin and Greek (notably, "Bunga, bunga!"). They asked for prayer mats and attempted to bestow fake military honours on some of the officers. One officer familiar with both Cole and Virginia Stephen failed to recognise either.

Beside the bad publicity for the navy and government, the worst fallout was reserved for the real Abyssinian Emperor, Menelik II, when he visited England after the hoax. People followed him yelling "Bunga! Bunga!" and his request to see a navy facility was denied. According to the same Wikipedia article, "In 1915 during the First World War, HMS Dreadnought rammed and sank a German submarine. Among the telegrams of congratulation was one that read 'BUNGA BUNGA'."

The HMS Dreadnought was sold for scrap and broken up in 1923. Cole went on to pull many more pranks but would die broke at the age of 50 in France (in 1936).

Update: For more on Cole, the article at the Oxford Dictionary of National Biography provides additional information on this... ahem... colorful character.

Horace De Vere Cole was a striking man with piercing blue eyes, bristling white hair, and stiff moustaches. His advanced deafness prevented him from realizing that his carefully timed coughing was inadequate to cover his explosive breaking of wind. Potentially a generous friend (when visiting someone ill he brought neither flowers nor books but the loan of a picture by Augustus John), in low moods he was pugnacious, abusive, or malicious. Always he was both conceited and lustful: Who's Who excluded him after he filled in his recreation as ‘f—g’.