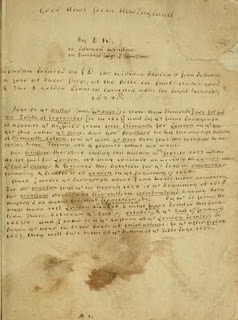 I confess we have come so far short of the means to raise such returns, as with great difficulty we have preserved our lives; insomuch as when I look back upon our condition, and weak means to preserve the same, I rather admire at God’s mercy and providence in our preservation, than that no greater things have been effected by us. But though our beginning have been thus raw, small and difficult, as thou hast seen, yet the same God that hath hitherto led us through the former, I hope will raise means to accomplish the latter. Not that we altogether, or principally, propound profit to be the main end of that we have undertaken, but the glory of God, and the honor of our country, in the enlarging of his Majesty’s dominions. Yet wanting outward means to set things in that forwardness we desire, and to further the latter by the former, I thought meet to offer both to consideration, hoping that where religion and profit jump together (which is rare) in so honorable an action, it will encourage every honest man, either in person or purse, to set forward the same, or at leastwise to commend the welfare thereof in his daily prayers to the blessing of the blessed God.

The text can be found at The Plymouth Colony Archive Project.
The Applewood version contains detailed notes, unlike the Applewood edition of Mourt’s Relation.

This is the fourth book written by early settlers I have read since Nathaniel Philbrick’s Mayflower. Edward Winslow contributed a major slice of Mourt’s Relation and picks up chronologically where that tract finishes, covering most of 1622 and 1623’s events in Plymouth colony. Good Newes also addresses the type of people that should attempt to settle in New England. Like Mourt’s Relation, the writing and publication of Good Newes comes shortly after the events covered while Bradford’s Of Plymouth Plantation was compiled years later (and not published for several centuries).

Winslow notes that God saved the Pilgrims, acknowledging that the Indians could have “easily swallowed us up” if “God had let them loose”. I don’t recall Winslow quoting any Scripture in this work which stands in marked contrast to the other books I read. Rowlandson could not go a page without a quote. Bradford quoted from many works and not just the Bible—I remember seeing Seneca and Pliny in his memoir, for example. But Winslow’s work repeatedly credits God in assisting the Pilgrims, even (or especially) when they did not know how close they might have been to ruin. Events occur at God’s pleasure, whether the outcome is good or bad for the English, which is consistent with the other writers. They believe bad events happen because of estrangement from God. Winslow’s dedication makes clear several items about the Pilgrims, or at least how they viewed themselves. They did not see themselves as fanatics but stress the importance of providing a Christian example to the Indians. The difficulty and hard work required in settling in New England is not hidden from readers but feels glossed over at times.

Many of the same themes mentioned in Of Plymouth Plantation and Mourt’s Relation appear here so I will try and highlight some different areas. After the dedication and introduction, the first chapter covers “A Brief Relation of a Credible Intelligence of the Present Estate of Virginia”. Winslow mentions the “bloody slaughter committed by the Indians”, the English response, and other difficulties (although the outlook is improving) in Virginia. I have to wonder if Winslow included this brief section so readers in England could contrast that situation to what he is about to describe for New England.

The Pilgrim approach to dealing with Indians, as portrayed by Winslow, entails coexisting peacefully if possible with contractual agreements and mutual respect. Threats to the Pilgrims will be treated sternly but peacefully, if possible. How the Pilgrims responded to a threat by the Narragansett Indians proved to be one of the funniest sections of the book. In response to the Indians sending a threatening bundle of arrows wrapped in a rattlesnake skin, “the Governor stuffed the skin with [gun]powder and shot” and sent it back. The Narragansett Indians were terrified, refusing to accept the skin, eventually sending it back whole to the Pilgrims. Maintaining a firm resolve in the face of Indian provocation, showing no weakness, provided the Pilgrims with relative peace (at least compared to other settlers who did not do so, as Winslow shows later in the book). One exception to their consistency in this area occurs when they realize that Squanto plays games with their loyalty, attempting to use the Pilgrims to destroy his enemies and build up his reputation. He is so important to them, however, that they make an exception in their dealings with him (while keeping a wary eye on his actions). Myles Standish’s behavior toward the Indians hovers between hot-headed overreaction and necessary firmness. His approach could be described as an early example of a “broken windows” approach, fixing small problems quickly before they lead to something worse.

In July 1622 Thomas Weston sent more English to New England, “some fifty or sixty men” that behaved rudely and destructively toward the Pilgrims. After these men set up a plantation at Wessagusset, the Indians begin complaining to the Pilgrims about the abuse they receive. This new settlement and the threat they pose to peace in the area become major themes in Winslow’s book. In short, Weston’s new settlement jeopardizes the Pilgrims. The Massachusetts Indians plan to “ruinate” the new colony and Plymouth, realizing that targeting only Wessagusset will bring revenge by the Pilgrims.

Massasoit’s sickness and Winslow’s visit receive more detail than provided in other sources. Winslow’s actions save not just the chief but many of his tribe as well. “This pains I took with willingness, though it were much offensive to me, not being accustomed with such poisonous savours.” Weston continually stresses the positive example the English can provide to the Indians and his actions in this case underscore how impressed the natives were and the goodwill it generated. With the appearance of Weston’s men the contrast between English behaviors becomes stark, as does Indian reactions.

As mentioned before, Massasoit is recovering, just off his deathbed, when revealing the plot by the Massachusetts against Weston’s colony and the Pilgrims. Just how far along the plot had advanced can be open to interpretation. Actions by those at Wessagusset (stealing from the Indians for example) poisoned the relations for all the settlers and the Pilgrim reaction reveals part of their mindset. The Pilgrims help the new arrivals at considerable expense, but at some point they realize they can no longer subsidize such behavior. “(B)ut especially for that we knew no means to deliver our countrymen and preserve ourselves, than by returning their malicious and cruel purposes upon their own heads, and causing them to fall into the same pit they had digged for others…”. The Wessagusset colony was so weakened that Indians openly taunted them to their face, giving some credence to the Pilgrim’s approach toward the Indians of presenting consistent firmness.

The Pilgrims’ pre-emptive attack, killing the local chief and several other Indians within Wessagusset, sends shock waves through the Indian tribes. The Pilgrims rationalize that they never entertained “to take such a course with them, till their own treachery enforced us thereunto”, but the Wessagusset colony forced the issue. Without their actions provoking the Indians the situation may not have occurred. The fallout from the killings included Indians fleeing their villages, hiding and dying in nearby swamps. A tough summer follows for the Pilgrims but Winslow continues to praise “our good God” for graciously providing for them as needed.

The chapter “Of the Manners, Customs, Religious Opinions and Ceremonies of the Indians” supplies insight into the Pilgrim mind. Winslow goes beyond the way Pilgrims viewed the Indians and includes their analysis of their relationship with God and his designs for them.

How few, weak, and raw were we at our first beginning, and there settling, and in the midst of barbarous enemies! Yet God wrought our peace for us. How often have we been at the pit’s brim, and in danger to be swallowed up, yea, not knowing till afterward that we were in peril! And yet God preserved us; yea, and from how many that we yet know not of, He that knoweth all things can best tell. So that when I seriously consider of things, I cannot but think that God hath a purpose to give that land as an inheritance to our nation, and great pity it were that it should long lie in so desolate a state, considering it agreeth so well with the constitution of our bodies, being both fertile, and so temperate for heat and cold, as in that respect one can scarce distinguish New England from Old.

Winslow’s text and the Pilgrim’s actions make clear they believe such actions come with responsibilities to act with “good and lawful proceedings”. The Wessagusset colony made clear that not all settlers in New England would have the same outlook as the Pilgrims. In addition, the killings of Indians at Wessagusset set the stage for further conflicts between the English and Indians.