My Stroke of Insight discussion 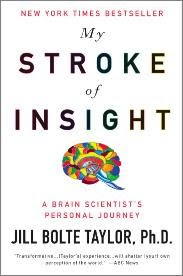 My Stroke of Insight: A Brain Scientist's Personal Journey by Jill Bolte Taylor follows a brain scientist’s stoke and recovery plus the insights she received from the experience. Taylor explains her life before the stroke, covers some basic anatomy and physiology of the brain, details what happened during her stroke, and follows the arduous process of her recovery. I recommend the book, or rather in particular the first half, for the fascinating look at what it is like to experience a stroke and rehabilitate a damaged brain. The second half seemed extremely repetitive, at least to me. Her website for the book can be found here.

The topic appealed to me on several levels. I worked for over a decade with a company that focused on developing minimally-invasive medical devices that treat the type of stroke that Taylor experienced. Having watched several procedures to treat patients with aneurysms, AVMs, AVFs, and other disorders her book added a human element to what I saw. Having had family members experience strokes added understanding to what I saw in the aftermath of those incidents. In addition, her discussions leant some insight as to how certain parts of the brain can function perfectly while other areas can lead to erratic and destructive behavior. There are three topics I want to review more in detail about Taylor’s book that I thought were particularly interesting and instructive:

1) The detail on the brain’s structure and functions
Taylor’s stroke occurred in the left hemisphere of her brain, where the logical section resides. Because of this she experienced domination by the right hemisphere, which means every moment was an overwhelming experience to all the stimuli she received. While the euphoria provides an incredible experience of the here and now, it limits understanding of what is happening (lack of context), shuts off communication with others (understanding what is outside the self), and shut down the ability to learn (the “filing system” in the brain is inoperable or limited).

In the two chapters that Taylor spends on brain anatomy and functionality, she emphasizes several things that seem esoteric. For example, the ability to define the limits or boundaries of our bodies appears a simple process but that assumes both brain hemispheres are working well and communicating together. When that assumption no longer holds, Taylor finds that she merges with the world around her, her body a group of fluids merging and losing definition within a fluid world. I enjoyed this approach as it applies not to just stroke victims but everyone, whether through brain development (seeing the functions children have to develop) or through brain deterioration (which could be one or both hemispheres or the communication between the two).

2) What a stroke victim experiences
Taylor’s experience as a stroke victim provides a wealth of information in dealing with other victims. She was able to hear just fine, but with her left side damaged she thought more in ‘pictures’ rather than in words Her delay in responding revolved around the time in retrieving the appropriate ‘picture’ from her memory and assigning meaning to it. While other stroke victims will have unique damage, it’s good to have the reminder that response different from ‘normal’ doesn’t mean the brain isn’t working in a different manner. Another area where Taylor’s story is helpful with stroke victims (and any patient) was her sensitivity during recovery to the energy people brought to her. The domination of her right side made her extra-sensitive to people’s attitudes and she responded accordingly. Taylor would shut down or ignore those radiating negative energy, while those that were nurturing elicited positive responses.

3) The fascinating brain (and body)
Taylor highlights the remarkable nature of the human brain, especially the ability to heal itself if we will only listen to it (although she could have extended the point to the body as a whole). Another valuable point Taylor raises is what she calls the “90-second rule”. From her interview at Amazon.com: “But I had no idea that it only took 90 seconds for me to have an emotional circuit triggered, flush a physiological response through my body and then flush completely out of me. We can all learn that we can take full responsibility for what thoughts we are thinking and what emotional circuitry we are feeling.” The control we have over our minds isn’t always apparent, but fortunately it is something we can develop.

The last half of the book seemed repetitive to me, covering methods to “step to the right” side of your brain in order to live a more balanced life (Taylor’s words). Despite this drawback (and my wife didn’t see the second half as tedious), I enjoyed the experiences and insights that Taylor shared in this book.

Update: I'd like to add a link to sensit's review of the book, putting into words some of my hesitation regarding the work, but from a "Buddhism-influenced" viewpoint.
Posted by Dwight at 9:21 AM