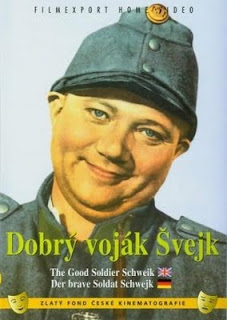 Since I just finished Book 2 and haven’t had a chance to write any thoughts about it, I’ll post a quick review of the 1956 Czech movie which is based on Book 1, “Behind the Lines”. The film faithfully follows Schweik’s misadventures in Hašek’s book, at least for the most part. Rudolf Hrusinsky as Schweik (the inconsistency in translating the name is unfortunate, but easy to adjust for) seemed to fit the role better as it progressed. Scenes sometimes looked like Josef Lada’s illustrations since several of the movie characters seemed cartoon-like, such as the plainclothes officer Bretschneider. The performance by the actor portraying Chaplain Otto Katz (Milos Kopecký) was far and away my favorite part of the movie.

Does the book translate well to film? The filmmakers definitely face a daunting task and, for the most part, they do a good job. Although at times something seems to get lost in the translation between media. Fortunately some scenes benefit from being seen instead of read. The drunken mannerisms of Chaplain Katz in the pulpit, for example, add quite a bit to his “sermon”. Since the setting is Prague, the biggest benefit of film is that we see many lovely shots of the city. Unfortunately some areas of the book are not included, such as Schweik’s earlier occupation as dog seller. Where the movie suffers worst in comparison with the book lies with the book’s ultimate targets, bureaucracy and what it does to people. The movie focuses mostly on Schweik’s bumbling adventures, which provide a large component of the book, yet Hašek uses these to develop his point. When this aspect comes through in the movie, such as the interview by the psychiatrists or the methods within the garrison prison (where the war’s success depends on the enemas given), the power of the book is mirrored.

Does the film stand by itself? (Can it be appreciated without reading the book?) For the most part it does / can. Viewers familiar with the book will probably enjoy the movie more, most importantly because the subtitles can fly by too fast to read at times. Some of the scenes and related dialogue are shortened for time constraints, such as the theft of Colonel Kraus’ dog. In addition, the number of Schweik’s anecdotes is reduced considerably. In the book, these anecdotes provide a cumulative effect in overwhelming the reader with the breadth of Schweik’s mind, both in the volume of his memory and how his mind connects disparate events. The depth of his mind, however, is rarely in question.

Links to film versions of Hašek’s book are listed at Švejk Central. I found the following quotes at the bottom of the page interesting:

"Parts such as Kaspar Hauser or the title character in Jaroslav Hašek’s The Good Soldier Švejk were projects [Peter] Lorre always spoke about -- [Charlie] Chaplin even offered to direct Švejk - but failed to ever realize." There are 17 pages with references to Švejk in Stephen Youngkin's book about Peter Lorre. The first nine are references to mentions of Švejk in the text of the book; the last eight are references to other sources mentioning Švejk. You might find the excerpts posted on amazon.com quite interesting.

In trying to picture what English-speaking actor could have played Švejk, Peter Lorre wasn't one of the first that came to mind but the more I think about it the more I like it. I would love to see what the Chaplain/Lorre collaboration could have produced. Yes, it’s a useless game but still fun to play. The only living English-speaking actor that comes to mind for the title role is Bob Hoskins (who would have had to play the part at least 20 years ago), but I’m always willing to entertain other suggestions. Since this release is easily available through rental at major sites (like Netflix), I thought it worth the time and effort to review and recommend it.