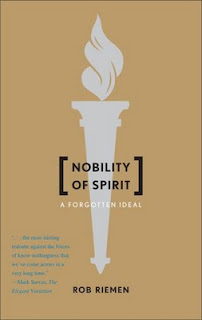 Paul L Martin at The Teacher’s View posted a review/summay on Rob Riemen’s book Nobility of Sprit (Yale University Press; $12.00, paperback). His review intrigued me enough to order it—if you’re not familiar with the book, please go read his wonderful summary at the link. There are three essays and a long introduction, all of which Martin covers very well. Here is the product description:

Nobility of Spirit is a spiritual journey to the source of those values—especially truth, freedom and dignity—that must be sustained in order for civilization to flourish. Riemen explores the tradition from Socrates and Spinoza, to Goethe, Whitman, and Thomas Mann—singular individuals who courageously refused to compromise their ideals, and he engages with them with great insight, intimacy and invention. It is the anti-fascist Mann with whom Riemen feels a particular affinity, and who serves as a beacon to a world free of barbarism. Mann’s 1945 volume, Nobility of Spirit: Sixteen Essays on the Problem of Humanity, inspires the form of Riemen’s inquiry. Indeed, Riemen’s eloquent meditation on "nobility of spirit" begins with an extraordinary encounter with Elisabeth Mann Borghese, guardian of the oceans, and the last surviving daughter of the great author of The Magic Mountain and other masterworks. Riemen’s slim, powerful volume ends with an essay on Leone Ginsberg, an Italian Jewish intellectual murdered by the Nazis, who implores his wife—the novelist Natalia Ginsburg—to “be brave” as he is taken to his death. Ultimately, Riemen calls for all of us to “be brave” as we battle those forces—terror, hate and ignorance—that are conspiring against humanity.

The essays I enjoyed the most were the first two: “The Quest of Thomas Mann” and “Untimely Conversations on Timely Questions”. Because Martin does such a good job on highlighting the strong points of the book, I’ll raise a couple of issues that surfaced while reading it. And possibly they are more than just quibbles.

1) What does Riemen mean by “nobility of spirit”? I’m not trying to be pedantic—this is the title and unifying theme of his essays. From the conversation with Joseph Goodman in the introduction:

“Nobility of spirit is the great ideal! It is the realization of true freedom, and there can be no democracy, no free world, without this moral foundation. Whitman’s masterpiece, his whole vision, is exactly about this: life as a quest for truth, love, beauty, goodness, and freedom; life as the art of becoming human through the cultivation of the human soul. All this is expressed by ‘nobility of spirit’: the incarnation of human dignity.”

Variations of truth, dignity, and the timeless ideal of civilization are frequently used in conjunction with the phrase. Riemen quotes Thomas Mann, who believed nobility of spirit was the “sole corrective for human history.” OK, I have the general gist of where he’s going, but… For someone that includes Socrates in a large portion of his essays, I don’t see Riemen’s non-definitions carrying much weight in an Athenian conversation two millennia ago.

2) What is the role of the intellectuals in Riemen’s view? Reimen seems to be following in Mann’s footsteps from The Coming Victory of Democracy (initial quote from Reimen):

”True democracy can’t do without an aristocratic bent—it must have a nobility, though not by birth but of spirit.” (Quote now [supposedly] from Mann) “In a democracy that does not respect intellectual life and is not guided by it, demagogy has free rein, and the level of the national life is lowered to that of the ignorant and uncultivated. But this cannot happen if the principle of education is allowed to dominate and if the tendencies prevail to raise the lower classes to an appreciation of culture and to accept the leadership of the better elements.”

OK, so an intellectual class can help democracies (in which “without nobility of spirit a democracy will fail of its own freedom” we are told many times). Giving examples of the “intellectuals’” responses to 9/11 doesn’t help justify the statement, however, but does get bonus points for full inclusion. To Riemen’s credit, he lets luminaries like Norman Mailer and Susan Sontag demonstrate their moral bankruptcy in their own words. If anyone wants to include them in the intellectual class, it says more about how far the bar has been lowered for membership.

Riemen spends plenty of time showing what the ‘intellectual class’ needs to avoid in order to …well, I’m not sure what. Stay relevant? Achieve the leadership “intellectuals” are supposed to show? Throughout the essays, Riemen gives examples of classical humanists that demonstrate courage and (possibly) “nobility of spirit”. Yet what is the purpose of these examples? While they provide inspiration toward dignity and civilization in general, it was almost as if the message was that intellectuals have no influence. Camus’ question on responsibility ("Aren't we all responsible for the lack of values? Shouldn't we be the ones to openly declare that we were wrong and that moral values do exist?") went unanswered by his fellow philosphes because they had other objectives than freedom and truth.

One intent of the examples (in the past or from literature) seems to be held up to inspire the “lower” and “better” classes. From Elisabeth Mann Borghese in the introduction, who can reference Marx with a straight face, through the last essay there seem to be an unresolved tension between viewing people as individuals and/or as members of a class.

3) The last quibble mostly impacts the final essay, but casts doubt on prior descriptions portrayed as quotes. Taking pride that there are no footnotes at Joseph Goodman’s request (although Riemen does provide a ‘selected bibliography’), the scenarios described make for powerful stories but how accurate are they? Socrates encouraged Plato to go to war in order to understand life? I think I missed that dialogue. And Leone Ginzburg's dream/hallucination that seems to equte the Catholic Church and the Nazi party fits in...how? Again, the stories are wonderfully drawn but there seems something contrived in the manner they are told. In addition, it causes me to question other quotes in the book—is that really what Mann wrote,for example?

Am I getting bogged down in minutiae? I wouldn’t doubt it. But the issues, as I noted, have the possibility of moving beyond mere quibbles and undermine some (or more) of the work. All that being said, I really enjoyed the book. Riemen is able to pull together disparate works and authors, showing connections and consistency of thought through the years. It expands areas I want to explore for myself, which I would guess is one of the author’s goals—exploring classical ideas in order to maintain civilization. And while I probably focus too much on a definition of “nobility of the spirit”, despite some clichéd descriptors it’s possible to get at least part of the essence Riemen is driving toward. I’ll end with part of the quote in the final note, which is from one of Machiavelli’s letters regarding entering his study after a day’s work:

I step inside the venerable courts of the ancients, where, solicitously received by them, I nourish myself on that food that alone is mine and for which I was born; where I am unashamed to converse with them and to question them about the motives for their actions, and they, out of their human kindness, answer me. And for four hours at a time I feel no boredom, I forget all my troubles, I do not dread poverty, and I am not terrified by death.