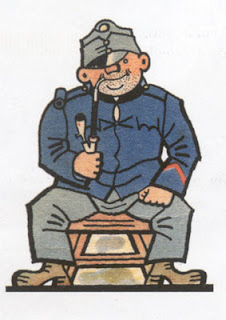 Several recent nonfiction reads have included quite a bit on World War I and The Good Soldier Švejk by Jaroslav Hašek (my keyboard mojo is going to be sorely tested with this book) was mentioned. As I posted recently, Barbara Tuchman’s The Guns of August outlined the prelude and first month of World War I as well as set the stage for the war. I did not go into great detail about one of Tuchman’s themes in A Distant Mirror, which is in the title—the tumultuous times in the 14th century provides a reflection of our modern times. From the Forward:

If our last decade or two of collapsing assumptions has been a period of unusual discomfort, it is reassuring to know that the human species has lived through worse before. Curiously, the “phenomenal parallels” have been applied to another historian to earlier years of this century [the 20th]. Comparing the aftermaths of the Black Death and of World War I, James Westfall Thompson found all the same complaints: economic chaos, social unrest, high prices, profiteering, depraved morals, lack of production, industrial indolence, frenetic gaiety, wild expenditure, luxury, debauchery, social and religious hysteria, greed, avarice, maladministration, decay of manners.

Not to mention everything that occurred during the war. But how to respond to the death, destruction, and everything else Thompson lists? If you are Jaroslav Hašek, you reach back to a previously created character and satirize the times and what they created. Humor isn’t unprecedented in such a case—in looking at Thompson’s comparison, Chaucer immediately springs to mind. Yet Hašek’s targets, while far-ranging at times, tend to eventually center on various aspects of mind-numbing bureaucracy, whether in the military or government. There was a surprising number (to me) of sites dedicated to the author and the work. Here are a few I found interesting:

The more I find out about Hašek the more I like him (but only at a safe distance). From the introduction of the Penguin Classics version (translation and introduction by Cecil Parrott), this event takes place just after World War I commenced:

He decided to fool the authorities by taking a room at U Valšů, which was notorious for being half-hotel and half-brothel, and registering himself there as a Russian. The name he wrote in the visitor’s book sounded Russian enough, but when read backwards in Czech it became ‘Kiss my arse.’ When required to state what he was doing in Prague he wrote that he was looking into the activities of the Austrian general staff. At the time war fever was at its height and the police were at once alerted and the hotel surrounded. They thought they had caught an important spy and were disappointed and embarrassed when they found that it none other than the by now notorious Hašek. Asked why he had done it Hašek replied in all innocence that he had wanted to assure himself that the Austrian police were operating effectively. He got off lightly with only five days’ imprisonment.

Švejk Central, includes a wealth of links and information regarding Hašek and the book

The Wikipedia entry on Hašek

Hašek’s entry at Books and Writers

An article at cultcargo.net: “Jaroslav Hašek - The Bad Bohemian”
“Life is no finishing school for young ladies.”

A Bohemian’s Tale by Andrew Parker, covering Hašek and the book

Švejk: A Hero For Our Time by Zenny K. Sadlon, “a few observations that Mike [Joyce] and I have made in the process of producing the new translation of Jaroslav Hašek's masterpiece of world literature.”

John H. Lienhard has a brief article about the devastation that obediently following orders can cause

Wikipedia’s entry on the novel, including a couple of illustrations by Josef Lada 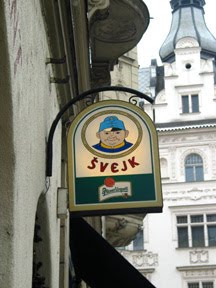 Švejk restaurant (apparently one of many)
Photo at The Dan Hood Bookshelf
Posted by Dwight at 10:58 AM

Excellent entry on The Good Soldier Švejk! I would also like to make you aware of two more online resource which are partly available in English:

About your picture of a Svejk-restaurant: there are many of them, not only in the Czech Republic. To get an idea, see this link (which only covers some of them):

Duly noted in the post now. Thanks for the links and the info!