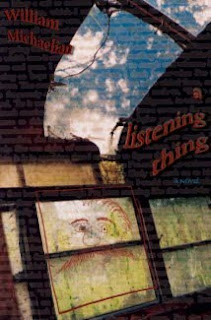 How do we face life’s seemingly insurmountable problems? For Stephen Monroe, an unsuccessfully self-employed typesetter still in love with his ex-wife, Mary, the only acceptable thing to do is to hang in there and fight — for love, for what he believes in, and for the voice inside him that’s struggling to be heard.

With humor and grace, A Listening Thing reveals the crumbling world of a talented man finally learning to face himself and the many mistakes he has made. Leaving behind the shabby desolation of his apartment for a weekend visit with Mary at his mother’s home, Stephen finds hope, and discovers love is more generous than he’d ever expected.

- About the novel from the book site

- The Wikipedia entry on the book

I don’t recall how I first stumbled on William Michaelian’s main website, but I do know Recently Banned Literature, his site of “poetry, notes, and marginalia”, became a daily visit. The link for the book noted above has several good synopses and reviews, as well as readers’ and the author’s comments. Since those overviews cover the basics (and much more) I’ll focus on items that initially struck me and have stayed with me in the week since I read it, as well as a few things I don’t see mentioned in the comments yet.

Repeated references to Samuel Beckett’s The Unnamable give an idea of the framework, with Stephen Monroe blending musings and recollections with details of his less than ordinary life as he searches for meaning. Stephen has self-awareness…maybe too much so, as he dwells on his own and society’s shortcomings. Yet he does so with humor and self-deprecation, endearing him to the reader. He is full of contradictions, reflecting his current status of limbo between states of being and not being.

Since I visited Recently Banned Literature before reading the novel, part of the book felt like a continuation of Michaelian’s posts. Through Stephen the reader is continually challenged to look at things in different ways…to approach something in various manners in order to fully experience and understand it. Dreams, as surreal or inaccurate as they appear, can contribute in comprehending or appreciating something:

Memory, after all, is a delicious thing. It is also a dangerously inaccurate medium in terms of self-exploration. Often, what we think we remember is not what happened at all, but, rather, what we wished had happened. Or, depending on what has taken place since, memory can supply us with a litany of excuses for why we are the way we are. Experience settles on us layer by layer. In time, with geologic force, information is distorted, compressed, or even obliterated — until it surfaces again in a different, yet familiar and recognizable form, triggered by a sight, scent, or sound. This causes things to shift and buckle at a psychological level, shaping us in the process, making us who we are. All the while, to preserve our hard-earned identities, we tell ourselves stories. These stories are endlessly fascinating. They also provide nourishment for our egos, which prefer fable over the challenge of new, reality-based information. We often mistake the comfort that results for sanity.

Stephen’s disappointment in himself, as well as watching the discontent of others, has the potential to continue his downward spiral. Yet his triumphal moments come when he simply ‘is’, released from the past (or at least as he views it) and from expectations (his, more than others). He goes beyond thought when translating his drawing of Uncle Leo into a story. In the trip to his mother’s house, his reconciliation with Mary begins when he lets go of both the past and the future.

Stephen’s resilient nature, causing him to carry on even though he doesn’t know how to or why, provides the opportunity for things to improve. Resiliency figures in all the characters lives in one form or another. Mary and Stephen’s mother both carry on in the face of loss and grief, the mother essentially willing Stephen and Mary’s reconciliation. As trite as it can sound, it is easy to discount our capacity for endurance as well as the ability to shape ourselves. Many thanks to William for making this novel available for free, especially after the troubled history in getting it published!
Posted by Dwight at 11:02 AM