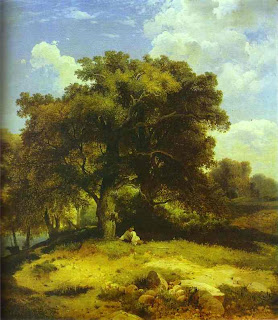 A brief post on the next nine stories in A Sportsman’s Notebook: “Bezhin Meadow”, “ Kasyan from Fair Springs”, “ The Bailiff”, “The Estate Office”, “The Bear", "Two Landowners”, “Lebedyan”, “Tatyana Borisovna and Her Nephew”, and “Death”.

The text and other links related to A Sportsman’s Notebook can be found here. All quotes are from the translation by Charles and Natasha Hepburn.

Turgenev’s wonderful outdoor descriptions continue in this section. I’ve already quoted the beginning of “Bezhin Meadow” in a previous post, while here is an example from “Kasyan from Fair Springs”:

It is a strangely enjoyable occupation to lie on one’s back in the forest and look upwards. You seem to be looking into a bottomless sea, extending far and wide beneath you; the trees seem not to rise from the ground, but, like the roots of huge plants, to drop perpendicularly down into those glass-clear waves, and the leaves on the trees are now translucent as emeralds, now opaque with a goldish, almost blackish, green. Somewhere far, far away, at the end of its slender twig, a single leaf stands motionless against a blue patch of pellucid sky, and beside it another one sways with a movement like the play of a fish on a line, a movement that seems spontaneous and not produced by the wind. Like fairy islands under the sea, round wide clouds float quietly up and quietly away—and suddenly the whole sea, the radiant air, the sun-drenched branches and leaves, all begin to ripple and tremble with a transitory brilliance, and there comes a fresh, thrilling murmur, like the interminable fait splashing that follow the rising of a sudden swell. You gaze without stirring, and no words can express the gladness and peace and sweetness that catch at your heart. You look—and that deep, clear azure calls to your lips a smile as innocent as itself; like the clouds in the sky, and as it were in company with them, happy memories pass before you in slow procession, and you feel your gaze passing farther and farther into the distance, drawing you after it into that peaceful, radiant gulf, and you have no power to tear yourself away from its height, from its depth…

Beyond nature and hunting, there is a lot more depth in descriptions of peasant life and the position of the serfs in this section. Turgenev’s success in these portrayals comes from downplaying an apparent agenda, passively (usually) narrating the action and describing what he sees. It has an effect similar to Let Us Now Praise Famous Men, where factual and lyrical writing also provide a portrait that is both horrifying and beautiful.

“Bezhin Meadow” focuses on children letting their horses feed at night. They tell ghost stories and other supernatural events they have witnessed or have heard. There has been something uniformly sad about the adult peasant characters so far that is missing from these boys. Their talk and stories show a faith that anything is possible. The "real" world intrudes at the end of the story with the death of one of the boys. There is something innocent in their belief in the supernatural, which seems to be shared by many of the adult peasants as well. Supernatural things are all around…things that cannot be controlled. It is a mindset that bleeds over into other areas, surrendering to fate and lack of control. The ultimate fate comes from the ever-impending possibility of death. The character who dies shortly after the events in the story says “You can’t escape your fate.” Always present death is the subject of the final story in this group, “Death”. The narrator muses that “Death takes the Russian strangely” while describing the end of several peasants. In most cases, their mind focuses on what must done to insure their death does not disrupt their family.

Kasyan, the title character in the next story, provides the most interesting character study so far in these tales. A dwarf with speech “not that of a peasant”, Kasyan displays convoluted but deeply felt principles. While describing how he and other peasants have been treated like property after their master’s death, he demonstrates how important he believes education to be—a recurring sub-theme within the sketches. He simultaneously rejects and embraces fatalism while distancing himself when possible from the upper classes. He shows both interest and apathy toward other peasants, but his tenderness emerges for those he feels responsibility towards--the animals of the forest have as much claim for his concern as does his ward. In addition, he is the one character so far that has had no concern for money.

“The Bailiff” and “The Bear” are thoroughly depressing stories and take the reader deeper into a system stacked against the peasant. In “The Bailiff”, the young landowner says of his serfs “One must treat them like children.” In dealing with them, he admits, you have to take into account their illiteracy, yet he does nothing to educate them. Content that money comes in as scheduled from his administrator (the ‘bailiff’), he shows no curiosity into his peasants’ status, willfully blind to their enslavement by the bailiff. “The Bear” highlights not just the poverty of the peasant (“I looked round and my heart sank within me: visiting a peasant’s cabin at night is cheerless indeed”) but also how the system pits peasants against each other. In contrast to many peasants shown so far, the forester (with the nickname of “the bear”) feels a duty to do his best for his master which causes him to be harsh toward other serfs. Here the narrator intrudes, pleading directly to the forester (and one gets the feeling toward the reader as well) for mercy.

“Two Landowners” and “The Estate Office” continue direct criticism of the serf system. Class distinction and money always matter, defining a person and how they are treated regardless of how deserving they are. “The Estate Office” provides another example of the narrator, once he mentions he will pay for some service, receiving instantly improved service. The merchant class receives more attention in this story, as well as the graft involved by agents of an estate. While social hierarchy is a constant focus, one example here highlights the unreal features: one character acts superior to other serfs because he is “the son of some aristocrat of the servant world.” The control a landowner has over their serfs extends to allowing or forbidding marriage, and even resolving the competition between two suitors (in this case, by relocating the servant girl that received their attention).

So what is a serf to do? Turgenev doesn’t provide any answers in these sketches, other than the call for mercy at the end of “The Bear”. The surreal nature of the system appears so convoluted and counterproductive that simple fixes aren’t available. The landed class comes off as generally ignorant and self-absorbed, yet I’ve mentioned that Turgenev seems to subtly show that complicity by the serfs with the system only makes matters worse. Yet he also shows how the system is stacked against any improvement of their lot. It’s possible that the readers of Turgenev’s felt he was describing a different world than they had encountered—as different for them as it is for me reading this 150+ years after its writing. Religion is rarely mentioned other than deferral to God in the same manner as to their master. As I have highlighted before, education is an implied improvement even though that only addresses part of the problem.

There is one avenue for escape mentioned. The problem with alcohol, hurled as accusations up to this point (to explain poor performance), receives one of the more biting comments from Turgenev in “Lebedyan” (although the subject is a noble): “He is a fair drinker, too…but in Mother Russia it is hard to achieve distinction on that score… .”