A Sportsman’s Notebook discussion: one 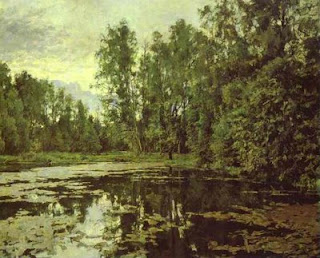 A brief discussion covering the first seven of the “sketches”: Khor and Kalinich, Ermolai and the Miller’s Wife, Raspberry Water, The Country Doctor, My Neighbor Radilov, Ovsyanikov the Freeholder, Lgov.

The text and other links related to A Sportsman’s Notebook can be found here. All quotes are from the translation by Charles and Natasha Hepburn.

While the underlying assumption of these stories is rather flimsy—the author’s experiences during hunting in the countryside—it is effective in painting rural Russian life and nature. I’ll highlight a few points running through these stories that I found interesting. “Khor and Kalinich” is the strongest story in this group. The story continually shows contrasts and comparisons between many different groups of people as well as individuals. Some of the contrasts are between the provinces of Orel and Kaluga, the peasants within those districts, nature in those districts, the peasants Khor and Kalinich, serf vs. master, men and women, as well as others. Power and control, as well as the question of freedom are addressed many times. Khor, described as a “positive, practical fellow, … a rationalist” has the following conversation with the narrator:

”Tell me, Khor,” I said to him, “why don’t you buy your freedom from the master?”

“And why should I buy it? As things are, I know the master and I know the rent he wants… .He is a good master, too.”

“All the same, you would be better off if you were free,” I remarked.

Khor gave me a sidelong glance. “Certainly,” he said.

“Well, then, why don’t you buy your freedom?”

Khor swiveled his head from side to side. “And what am I to buy it with, sir?” [He is rumored to have money squirreled away]

“Once Khor gets in among people who are free,” he continued below his breath, as if talking to himself, “any fellow who shaves his beard would be Khor’s master.”

“But you could shave your own beard, too.”

“What’s a beard? A beard is grass; you can always cut it.”

The following quote appears on many sites discussing Turgenev and this work: “He won his first success in 1847 with "Khor and Kalinich," a sympathetic story of peasant life, which was published later, with similar stories, in A Sportsman's Sketches (1852).” (See Yahoo Encyclopedia for one place this appears, although the information comes from The Columbia Electronic Encyclopedia, 6th ed. Copyright © 2007, Columbia University Press). Yet I find the tone of “Khor and Kalinich” not consistently sympathetic, bordering on damning some of the peasants at times. Khor is relatively well off for a serf, yet he prefers the appearance of control instead of actual freedom. Khor points out how the master abuses Kalinich (and seems more upset by Kalinich’s indifference than to the poor treatment), yet Khor is happy to stay in a position of authority relative to other peasants and keep the system unchanged.

The question of freedom is a thorny one, but so far Turgenev seems to show two underlying things needed for liberty: an inner drive or desire for it as well as education. Kalinich is able to read and knows how to accomplish many things, but has absolutely no drive to change his status. While Khor cannot read, he demonstrates “wide knowledge” and is shrewd. Yet he is complicit in maintaining the serf system since he will retain his relatively privileged status. Instead of a simple “peasants good, gentry bad” formula, Turgenev layers his criticism, sparing no class of people. While he clearly targets nobles who wish to keep the serfs in their place (which includes denying them an education), he does not seem to have much sympathy for the serfs that have an opportunity to improve their lot but would rather moan about the cruelty of fate (like Khor and Kalinich). While sympathetic in listening to “the shrewd simple speech of the Russian peasant” from Khor and others, their portrayal stands in marked contrast to peasants like Feodosya Mikhailovna (in “Ovsyanikov the Freeholder”) who worked hard to achieve her freedom, only to be forced to wait for her master to approve her release.

For structure, Turgenev usually begins with a “while I was hunting for x around the region of y” narrative, using this premise to provide lush depictions of the Russian countryside before introducing the peasants and or landowners he wants to portray. I enjoy his descriptions and can easily picture the scene and the people (and even the animals). Several times his structure sets the story up in this manner, flashes back on a character’s life to provide irony or pathos about their current situation, and then quickly ends the story. Rarely do these stories go anywhere or have much action. The passive narrator draws stories out of his characters, providing something more than just a slice of life. This mosaic approach, depicting individual details to provide an overall effect, works well with his depiction of an uncertain and decaying time.

The nostalgia is especially strong in “Raspberry Water”, “My Neighbour Radilov”, and “Ovsyanikov the Freeholder”. The characters discuss the situation of their current time versus that of prior years. Descriptions of places often show run-down or ruined structures while portrayals of peasants highlights their precarious situation, uncertain of where tomorrow’s food will come from. Even the landowners are far from being well off or secure. There is a sense that people, especially nobles, were grander, fairer and wiser in the past. But not everyone agrees. Luka Petrovich, in “Ovsyahikov the Freeholder” describes his mixed feelings: “No, I have no special reason for praising the good old days. Now take yourself, for example. You’re a landowner to-day, as your late grandfather was, but you’ve nothing like the same power, and you’re not the same sort of man, either.” One more example, from “Raspberry Water” where the narrator is chatting with Styopushka (a serf “they hardly bothered to count” when the census was taken) as they fish:

”You had a strict master, I see,” I began, after a few moments of silence.

“That was the fashion then, sir,” rejoined the old man, shaking his head.

“Things are different now,” I observed, looking at him keenly. He gave me a sidelong glance.

“No doubt things are better now,” he muttered, and cast his line far out into the stream.

Somehow I have trouble believing he really means that. With the false (or at least questionable) nostalgia and the poor conditions of the current day, it becomes somewhat understandable why the serfs may not uniformly want to be freed. They may view it as easier to be ill-treated but have excuses for your poor lot than to face uncertainty in troubling times on your own.

For some that are granted their freedom, like Vladimir in “Lgov” who subsists “on manna from on high”, the question arises if they are truly better off. The peasants are often viewed as something less than human by many of the landowners (who are rarely better educated). While there are beneficent landowners portrayed in these stories, they are the exception. More often the owners appear to believe the peasants exist to serve their whims, as well as feelingthe serfs are lucky to have such magnanimous owners.

Good write-up and good observations. The nineteenth century Russian authors always get under my skin. They hold a special place in my reading experience, as do some of the French, especially Maupassant, Zola, and Balzac, who was one of the greatest windbags of all time.

Thanks. Under your skin? I'm trusting that is in a good way?

I'm finding I like Turgenev for various reasons... there is some depth underneath the superficial. His descriptions feel so effortless and economical...you easily picture what he is describing.

What helps is his (seemingly) agenda free narrative. Amazing how fun it is to read when you're not being clubbed over the head with self-righteousness.

I do find an edge to his writing...while not blaming the serfs for their plight, he definitely seems to hold those accountable that have a chance to improve their lot but fail to do so. I have yet to see a mention of this aspect, so I wonder if I'm reading too much into it.