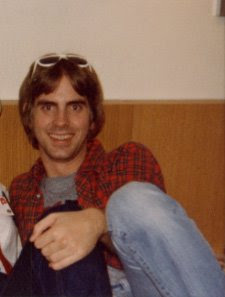 No, not the picture of me from August 1982 (which I ran across this morning when looking for other files). Someone placed a hold on The Odyssey: A Modern Sequel at the library and I can’t renew it. Who knew it was in high demand? Unfortunately I had checked it out several weeks before I could begin reading it so I’ll need to return it this weekend. While I found a version of the book online, I am too much of an old “gotta have the book in my hands” fart. So what to do? I had just gotten rolling on the book. But I think I’ll move on to Turgenev and read a few of his shorter works in the next couple of weeks and come back to Kazantzakis when the book is returned. At least that's the plan for now.
Posted by Dwight at 8:07 AM

No doubt the gods are toying with you. Better place a hold on it yourself, before someone else does.

Thanks. And I thought the same thing on the gods. And yep, two can play the hold game...I don't want to be mean about it. I just want to read the book!

The same thing just happened to me with Bleak House audiobook. Requested before I could finish, and by two people! I only had 7 discs left to listen to out of 28. I hate when that happens. :-)

This is the second straight time this has happened...last time I had the audiobook of The Odyssey so I could listen to it during my commute. I didn't finish it either, but I was able to find enough time to read so it didn't bother me...just enjoy listening to Homer, though.

And thanks. Anytime my wife makes fun of my pictures, I can point to her big hair photos to offset the teasing...

How was Bleak House? I have hardly read any Dickens and that is one I would love to tackle.

Chrees ~ At first I found the vast multitude of characters in Bleak House confusing and couldn't see the common thread that would pull it all together. Once the story finally starts weaving together, I began to enjoy it much more. It is my fourth Dickens book, and while it's not my favorite so far, I am still in love with his writing style, overly verbose and flowery as it may be at times. :-) My favorite at this point is A Tale of Two Cities, but Nicholas Nickleby is not far behind!