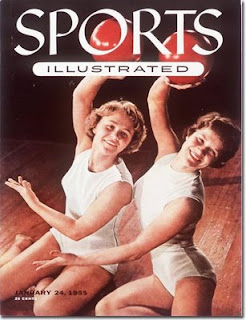 The vacant ice looked tired, though it shouldn't have. They told him it had been put down only a few minutes ago following a basketball game, and after the hockey match it would be taken up again to make room for something else. But it looked not expectant but resigned, like the mirror simulating ice in the Christmas store window, not before the miniature fir trees and reindeer and cosy lamplit cottage were arranged upon it, but after they had been dismantled and cleared away.

Then it was filled with motion, speed. To the innocent, who had never seen it before, it seemed discorded and inconsequent, bizarre and paradoxical like the frantic darting of the weightless bugs which run on the surface of stagnant pools. Then it would break, coalesce through a kind of kaleidoscopic whirl like a child's toy, into a pattern, a design almost beautiful, as if an inspired choreographer had drilled a willing and patient and hard-working troupe of dancers—a pattern, design which was trying to tell him something, say something to him urgent and important and true in that second before, already bulging with the motion and the speed, it began to disintegrate and dissolve.

The Sports Illustrated vault has a couple of articles on/by William Faulkner. The first, taken from the issue shown above, covers Faulkner watching his first hockey game: An Innocent at Rinkside.

The second article is by Whitney Tower, recalling what it was like to experience the Kentucky Derby with Faulkner and other writers over the years: Prose for the Roses. Fortunately it wasn't a gonzo experience: "Despite the warnings about his fondness for bourbon and fears that he might not do his work in Louisville, Faulkner performed with precision and, god knows, distinction."

Faulkner and Sports Illustrated. Huh! I never would have thought to put those two together.

It made me think of George Plimpton's sporting exploits, except Plimpton was doing more than just observing.

This was when SI was just starting so I'm sure they were looking for any name that would elevate/legitimize them. And you're right... just picturing Faulkner at a hockey game makes me laugh, although I don't know why since I see all sorts of people at local games (and have the unfortunate habit of literally bumping into them).

How can I get a copy of Whitney Tower's take on Faulkner? If I remember correctly, Faulkner could tell in which direction to drive to find a distillery--by smell.

Unfortunately those links are now dead and I don't see a live link available to the articles. Here's what A William Faulkner Encyclopedia has on the second Sports Illustrated article (page 215):

"Kentucky : May " Saturday," the second of two impressionistic essays (the other was "Innocent at Rinkside") that Faulkner was commissioned to write for Sports Illustrated in 1955. An on-the-scene description of the eight-first annual running of the Kentucky Derby, the essay was first published in the May 16, 1955 issue of Sports Illustrated and later collected in James Meriwether's edition of Essays, Speeches and Public Letters of William Faulkner (1965). Unconcerned with the factual details of the race, disdaining even to name the winning horse and jockey, Faulkner instead seeks to capture the spirit or essence of the horse race, finding in the event symbolic expression of paradoxes he found inherent in the human condition: life and death, past and present, reality and dream, victory and defeat.

The entry also mentions Robert W. Hamblin's article "Homo Agonistes, or, William Faulkner as Sports Writer." Aethlon: The Journal of Sports Literature 13 (Spring 1996): 13-22. The entry in the encyclopedia was written by Hamblin.


Your best bet is probably a library that has the latter volume available since I doubt SI has been digitized from that long ago. Then again, you never know where it might turn up scanned.