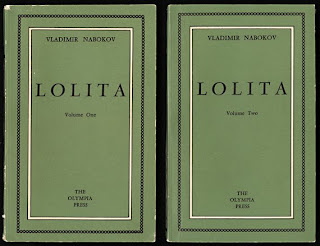 The Olympia Press’ cover of Lolita
Picture source
There are many informative sites dedicated to Nabokov and Lolita, but unfortunately many of the links I tried at these sites no longer exist. Hopefully the following links will stick around for a while.

The gateway to an extended interview at The Paris Review (which can be found here--large .pdf file)

"Poshlust," or in a better transliteration Postlost, has many nuances, and evidently I have not described them clearly enough in my little book on Gogol, if you think one can ask anybody if he is tempted by poshlost. Corny trash, vulgar clichés, Philistinism in all its phases, imitations of imitations, bogus profundities, crude, moronic, and dishonest pseudo-literature--these are obvious examples. ... Poshlost speaks in such concepts as "America is no better than Russia" or "We all share in Germany's guilt." The flowers of poshblost bloom in such phrases and terms as "the moment of truth," "charisma," "existential" (used seriously), "dialogue" (as applied to political talks between nations), and "vocabulary" (as applied to a dauber). Listing in one breath Auschwitz, Hiroshima, and Vietnam is seditious poshlost. Belonging to a very select club (which sports one Jewish name--that of the treasurer) is genteel poshlost.

(See this extended entry on poshlost)

Zembla, the Nabokov resource from Penn State University. A treasure-trove of information.

The New York Public Library’s exhibition on the occasion of the centennial of the writer’s birth. Here is the related seminar on Nabokov and his work.

“Nabokov’s Butterflies”, an article in The Atlantic, along with links to some of his works published in the magazine

Essays on some of Nabokov’s short stories by Roy Johnson. “It is the purpose of this study to trace the development of his skill in the creation of short fictions through the whole of his fifty published stories, and in particular to examine his manipulation of traditional narrative modes.”

A review of a biography on his wife Véra.

The Nabokov Museum in St. Petersburg

Discussing Nabokov at Slate by James Wood.
I’m not very far into Lolita but I can understand the reservations Wood mentions. I find myself (so far) closer to Wood than Danilo Kis, but I reserve the right to change my mind.

I'm inclined to find fault with Nabokov, while cherishing him for all his lusters, and to come to a position somewhere between Rorty's veneration of Nabokov as a moral sage, always pressing his case against "cruelty," and the Yugoslav writer Danilo Kis' unfair complaint (in his essay "Nabokov, or Nostalgia") that Nabokov's is "a magnificent complex, and sterile art." I feel, paradoxically, that Nabokov is neither wholly humane nor wholly sterile.

Nabokov’s 1964 interview in Playboy (the interviewer is Alvin Toffler). Unfortunately there no graphics. Check out the Interviews section at this post for more interviews.

The Cinematography of Nabokov's Creative Vision by Leigh Kimmel. An additional essay by Leigh: Nabokov as Translator.

An NPR piece on the fate of Nabokov’s unfinished manuscript. Additional Nabokov stories are linked at the end of the article. Another article on the (currently) unfinished, unpublished story.

Update April 23, 2009: The Nabokov Assignment looks at the short stories in The Stories of Vladimir Nabokov, adding comments, excerpts, biography, or anything else that came to mind while reading each story.

Lolita, U.S.A.—a geographical tour of the book’s trips. Also, a chronology of the book is provided.

The many covers of Lolita. Love the font that screams "I'm from the '70s!"

Update:Academic Earth has three lectures on Lolita and Nabokov. I haven't listened to them so I can't comment, but the overviews look promising.
(Feb. 26, 2009)

Update:D. G. Myers, at A Commonplace Blog, has a wonderful post regarding The enactment of moral experience in Lolita.
(Mar. 11, 2009)

Update:Chris Lott posted on Lolita at 62 as well as noting the passing of Alfred Appel, Jr. (who compiled The Annotated Lolita).
Thanks to Chris and William for steering me to these links.
(May 12, 2009)

Thanks... I mused on Lolita's 62nd Birthday a while back... what a tremendous book.