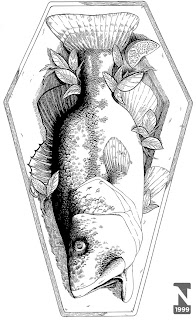 Not until section 40 do we hear from the central character of the book, Addie. The provenance of her monologue is unexplained, but the placement here between the family’s exposure to flood and fire seems to have maximum impact. Up to this point Addie has been a sympathetic character, abused in death and seemingly mistreated in life (as anyone married to Anse would be). However once exposed to her it is difficult to continue liking her. The revulsion at her hatred of kids though she’s a schoolteacher is surpassed only by her sadism in looking forward to whipping her children. Her only goal in life seems to be to be left alone, even though she agreed to marry. Her disappointments in Rev. Whitfield, first when she found her passion not reciprocated and second from his hypocrisy, seem to be a major reason for her loving focus on Jewel (mentioned here and in the story of Jewel’s horse).

Her discussion on words and their inadequacy (or maybe irrelevancy) is one of the most famous parts of the book. Words are “just a shape to fill a lack”, “developed by someone who had to have a word” to describe something they had not experienced, and “don’t fit even what they are trying to say at.” In her discussion about religion and Cora Tull, Addie dismisses sin and salvation as just words. Yet she makes Anse promise to bury her with her family in Jefferson. If she expects the promise to be kept, words have to have meaning, at least to those promising. In this respect, she is more like Anse than she would want to admit—she is taking advantage of others who give words meaning, the same way Anse takes advantage of kindness and Christian hospitality. He doesn’t believe in it any more than it benefits him.

While there are more explicit references to religious topics, especially in the person of Rev. Whitfield, there are sub-texts adding to the feel. Whitfield’s monologue has a Psalms-like feel, for example. Faulkner seems especially dismissive of religion when looking at Whitfield, an extremely weak character hoping God will regard intent and deed as the same. However there are characters who exemplify Christian tenets, sometimes mentioning it explicitly or in passing and sometimes not at all. Possibly the intent is to demonstrate the vast gulf between words and deeds. The twin disasters the family faces, flood and fire, have connotations with religion. Among other things, the flood ties to Noah or baptism, cleansing actions in both cases. Fire is usually a symbol of divinity or purification, although it is also used in conjunction with hell. The ties of many of these symbols or references are minor, but by layering many of them together Faulkner invokes religious overtones. The overriding message is a dark nihilism...nothing to believe in outside of the individual, and most times not even that.

The language of the monologues makes for an interesting reflection on the characters. Darl’s language deteriorates as his insanity grows (almost mimicking Vardaman), but for a couple of monologues when he is at his craziest he sounds completely sane. However his final monologue shows a complete detachment from reality (and even himself). The lens through which the characters view others stands out even more in this section. Cash sees everything through construction metaphors. Dewey Dell mistrusts all men, although that doesn’t stop her from being taken advantage of in trying to end her pregnancy. She projects her own sexuality onto others, sometimes with reason. Her ruthlessness develops too, as she tells Gillespie that Darl started the barn fire as well as being the first to tackle Darl when the orderlies come to take him away.

The family dynamics never improve through the book. There is enough hatred to go around for everyone, although Cash is the exception--he likes everyone and they all seem to like him. Addie's death leads to escapism on everyone's part, no on able to mourn or even face it. The linking of female sexuality and childbirth to death is but part of the overriding outlook that nature itself is an enemy of the human condition.

Even so, the resiliency of the human spirit comes through dramatically in the book. While the entire family weathers challenges, physical and emotional, most come through all right. This is one story where you want to find out what happens to the characters after the last page, although part of the appeal comes from the quick, comic ending. Cash embodies all the pain the family and the characters endure. It is tempting to push Faulkner’s Nobel Prize speech back 20 years as the message of As I Lay Dying, and it wouldn’t be completely wrong: “I believe that man will not merely endure: he will prevail. He is immortal, not because he alone among creatures has an inexhaustible voice, but because he has a soul, a spirit capable of compassion and sacrifice and endurance.” However there is more going on in the book than simply endurance or prevailing, but that is the kernel that drives the family despite their feelings toward others and themselves. Even more compelling is the complete lack of hope in this book. The most Cash can hope for is a record player to add a little pleasure to the evenings. Midway through the book Dewey Dell tells herself "I believe in God, God. God, I believe in God." It sounds more like she is trying to convince herself he exists. Regardless, she may believe in God but God surely doesn't believe in the Bundrens.

Whether the character believes there is more to living than simply getting “ready to stay dead a long time” doesn’t seem to matter to the characters—they face life ultimately alone, Job-like. As Peabody said as he looked at Addie:

That’s what they mean by the love that passeth understanding: that pride, that furious desire to hide that abject nakedness which we bring here with us, carry with us into the operating rooms, carry stubbornly and furiously into the earth again.

One minor theme that someone writing a paper might want to explore could be Faulkner’s us of up and down versus sideways. The reader runs across these contrasts several times: Anse’s complaining about the temporal nature of the road (sideways) versus the stability of a home (up & down), Cash’s focus on building the coffin (stress or water coming from up and down or sideways), and Addie’s discussion on words (going “up in a thin line, quick and harmless”) versus deeds (“terribly doing goes along the earth, clinging to it”) among others. I’m not sure there is an ultimate message here but it might be fun for someone to delve into these delineations.

Email ThisBlogThis!Share to TwitterShare to FacebookShare to Pinterest
Labels: As I Lay Dying, William Faulkner