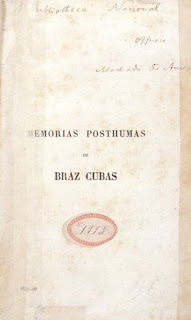 For some time I debated whether I should start these memoirs at the beginning or at the end, that is, whether I should put my birth or my death in first place. Since common usage would call for beginning with birth, two considerations led me to adopt a different method: the first is that I am not exactly a writer who is dead but a dead man who is a writer, for whom the brave was a second cradle; the second is that the writing would be more distinctive and novel in that way. Moses, who also wrote about his death, didn’t place it at the opening but at the close: a radical difference between this book and the Pentateuch. -- Chapter 1

Perhaps I’m startling the reader with the frankness with which I’m exposing and emphasizing my mediocrity. Be aware that frankness is the prime virtue of a dead man. In life the gaze of public opinion, the contrast of interests, the struggle of greed all oblige people to keep quiet about their dirty linen, to disguise the rips and stitches, not to extend to the world the revelations they make to their conscience. And the best part of the obligation comes when, by deceiving others, a man deceives himself, because in such a case he saves himself vexation, which is a painful feeling, and hypocrisy, which is a a vile vice. But in death, what a difference! What a release! What freedom! … The gaze of public opinion, that sharp and judgmental gaze, loses its virtue the moment we tread the territory of death. My dear living gentlemen and ladies, there’s nothing as incommensurable as the disdain of the deceased. -- Chapter 24

Thus are the ‘bookends’ of this section. I was hoping to be further along but work and home (and a cold) have a way of intruding on all other intentions. In the resources link there are some good overviews of the book. I don’t want to rehash their summaries but I do want to point out some things I found interesting. Having just read Tristram Shandy, it was easy to see its influence on Machado de Assis. But he (or rather Brás Cubas) acknowledges the debt in the preface: “I, Brás Cubas, have adopted the free-form of a Sterne or a Xavier de Maistre.” There are so many literary references in the book that it would be easy to get bogged down trying to identify all of them. But Sterne’s influence is easy to identify in the structure and content—chapters with varying lengths, chapters with no content, digressions piled on digressions, conversational conspiracy with the reader, the blame on Fate for all that goes wrong, hobby-horses, etc. Yet the work is unique enough to have its own voice. The details of how a deceased Brás Cubas was able to compose and publish these memoirs are begged off in the preface as long and unnecessary. “The work itself is everything: if it pleases you, dear reader, I shall be well paid for the task; if it doesn’t please you, I’ll pay you with a snap of the finger and goodbye.”

A summary of the section cannot do it justice, but to give an idea of its scope this section starts with his death, mentions his idea for a poultice (he dies before it could make him wealthy), and covers his youth up to the point his mother dies after he returns from school in Portugal. As the quotes I’ve included so far show, the reader is expected to be an active participant in these memoirs. And Brás Cubas isn’t shy in promoting himself or his style: “And now watch the skill, the art with which I make the greatest transition in this book.” Of course, it isn’t often that the dead tell us about their life. Yet so far there hasn’t been much of note to tell about Brás’ life. When talking about his poultice idea, his idée fixe, he admits that “I had a passion for ballyhoo, the limelight, fireworks.” Of course, the fact that he describes himself as a mediocrity even though he compares himself to Moses, or his memoirs to the Pentateuch, is further evidence that he is completely full of himself. But that makes him endearing…you know he is full of it yet you enjoy being taken along for the ride.

One other thing that stands out about his self-absorption—what would be the first question a living person would ask of a dead person writing their memoirs? Tellingly, Brás Cubas is silent on the afterlife. Maybe because there is nothing to relay? Or maybe because he is a mediocrity there as well as on earth, with nothing to ballyhoo or promote as of yet? His delirium just before death yields a marvelous dream of his travel with Nature/Pandora and may leave a clue: “I’m not only life, I’m also death, and you’re about to give me back what I loaned you. You great lascivious man, the voluptuosity of nothingness awaits you.” If that’s the case, his mediocrity on earth is worth yearning for.

The love affair with Marcela, if it can be called that, didn’t interest me as much as the fall-out from it. Maybe because he had already alerted us to his foolish nature, maybe because it reminded me of Eça de Queirós (reading things out of chronological order can throw reader appreciation off markedly), but mostly due to the tender story between the ship captain and his dying wife that immediately follows. The comparison between the two “loves” is unavoidable being placed next to each other and as usual Brás Cubas comes up on the short end. That he recognizes something special in the captain and the pair redeems Brás somewhat. Add the death of Brás Cubas’ mother and you could have a rather morbid section in these chapters. What saves it is Brás’ natural roguish appeal—he doesn’t take life or death seriously. If you needed a literal demonstration, his thoughts while tipping the muleteer that saved his life shows how much he values himself. The tip started out as three gold coins before he settled on one silver coin…and before long he was wishing he had given him copper coins instead. In reducing the muleteer’s actions to Fate or a “natural impulse”, the real devaluation is in Brás’ self-worth.

There are a few other themes that I’m looking forward to seeing developed, notably love, time and literature. I’ll delve deeper into those themes as Machado de Assis… errr, Brás Cubas does in his memoirs.