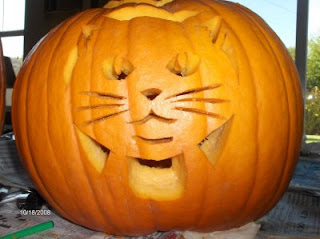 Well, you can tell what we did this weekend, much to the chagrin of a few pumpkins. Not much in the way of links this week since the Chrees household has been busy with spookier things. That being said...

It seems the recent movie version of Evelyn Waugh's novel decided to concentrate on sex and ignore religion--not surprising since this happens all the time (I still want to re-read The Scarlet Letter and find Hester Prynne's hot tub scene as portrayed by Demi Moore). This liberty stood out a little more for me since Brideshead Revisited is what I took to the hospital when my first son was born. I may have been sleep deprived and focusing on other things, but even with what little attention I paid to the book I could pick up on the religious current which was far from a feel-good message. I guess I'll have to re-read the book and see what I missed the first time around. And rent the TV mini-series instead of the recent movie.

I have been working on the gap I've had regarding Spanish, Latin American and Portuguese lit the past few years since the more I've read the more I have enjoyed. Since I'm reading Machado de Assis now and Kafka is up next, I found this article on the convergence of writing between two totally different writers informative:

If Kafka invented his distinctive kind of plot, then Bioy succeeded in twisting Kafka’s plot to serve his own ideas. Both Kafka and Bioy took a cue from G. K. Chesterton (whose writing they loved) in creating works of immense logical rigidity. They both wrote in a sort of adventure/detective genre, and though it is true that most adventure and/or detective novels are characterized by the kind of strict plotting exemplified by Chesterton and emulated by Bioy and Kafka, these two are notable for the way in which rigid logic governs their works. This rigidity goes above and beyond that typically found in novels of the genre, and in their hands the logic itself becomes a defining feature. It argues things that had never been argued before. It creates strange equivalences that beg perhaps unanswerable questions. In short, it gives their works their distinctive feel. Out of this logic come strange systems that shimmer through tears in reality, light and effervescent yet preternaturally able to sustain, and inspire, interpretations. It is precisely this clearly felt but impenetrable logic behind Kafka or Bioy’s work that leads readers to such robust, contradictory opinions on what each of their novels means.

The article provides a nice summary of Balzac's life and voracious appetites:

Balzac was a man of enormous appetites and most of them were the subject of public comment, if not ridicule. Oddly enough, his love life remained largely out of the public eye. Balzac was nothing if not discrete, an important characteristic if you intend to sustain as many as four love affairs simultaneously. It’s never been determined with certainty the number of illegitimate children he bore, but there was certainly two and probably more. Many of his paramours were aristocratic women, most of them single. Only one, Duchess Claire de Castries, perhaps the woman of highest birth he ever pursued, is known to have rebuffed him. He had affairs with numerous Countesses, Marquises, and Baronesses. Madame De Berny, his first mistress, 20 years older than Balzac, was his lover well into his 40s, and the love of his life, Countess Eveline Hanska, who finally agreed to marry him near the end of his life, was his mistress for more than 15 years. 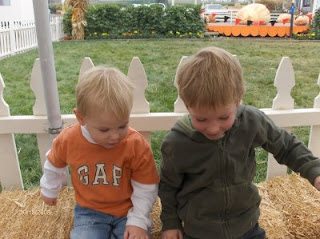 Beautiful picture of the kids. It’s hard to believe that in a few years, they’ll be drinking coffee and reading Balzac. Watch ’em — I’ve seen it happen!

Thanks. The oldest has always loved books and we try to go to the library once a week...I see him reading this blog in a few years and telling me I got it all wrong...