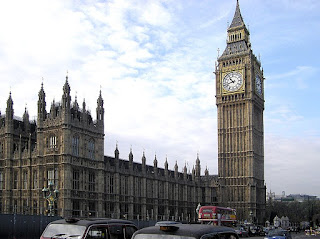 Guidedrius: Fear no more the heat o’ th’ sun,
Nor the furious winter’s rages,
Thou thy worldly task has done,
Home art gone and ta’en thy wages.
Golden lads and girls all must,
As chimney-sweepers, come to dust.

Arviragus: Fear no more the frown o’ th’ great,
Thou art past the tyrant’s stroke,
Care no more to clothe and eat,
To thee the reed is as the oak:
The scepter, leaning, physic, must
All follow this and come to dust.
--Cymbeline, William Shakespeare, (Act IV, Scene ii, lines 258–269)

Work and home have been incredible busy lately so I have had trouble finding the time to read or post. I’ll try and at least cover the first third of Mrs. Dalloway (up to the old woman singing outside the Regent’s Park Tube station—approximately noon) with this post. I’m not sure why I’ve been so resistant to reading this book, pushing it back in my ‘schedule’ several times. At first the book seemed like a first draft of To the Lighthouse, with many of the same themes and a similar approach as the subsequent work. It took a few pages to realize the work definitely stands on its own. For those coming to Woolf for the first time, I would suggest saving To the Lighthouse for later and start with an earlier work like this. I think I also dreaded writing up something about the book…I have trouble condensing Woolf and never get the feeling that I will do her justice.

Like To the Lighthouse, time is a major focus. Weaving back and forth through time in both consciousness and narration, characters live in the present while keeping the past active. Clocks are an omnipresent symbol of time passing, whether through the chiming of Big Ben, the presence of commercial clocks, or people consulting their watches. Most of the characters presented in this section allow their minds to wander back in time, usually to one major point in their lives. Peter Walsh and Clarissa Dalloway look back to a particular summer at Bourton, while Septimus Smith focuses a lot on his time in “The Great War” (WW I). At one point Peter asks “For why go back like this to the past?” as if it were possible not to do so. These looks back evoke not just memories but actively influence emotions.

The passing of time also ties into a major theme involving death. In this section death is mentioned or alluded to in many forms, from the dying words of Carissa’s uncle to Clarissa’s own musings about what will continue after her own death. This post’s opening quote, phrases and lines repeated often by Clarissa, are an excerpt from Cymbeline which directly addresses death as almost a comfort or relief from life. Septimus’ existence is a constant reminder of death, whether those he saw in war or his own suicide threats. Peter’s thoughts of death rattle him, causing him to wander aimlessly through London. It is almost as if living or dying has gone beyond a possibility for several characters and has become a choice.

As in To the Lighthouse, watery images play an important role but in this work the images do not have the same central focus or quite the same meanings. My favorite image so far has to do with ripples, appearing in many forms throughout the book. The “leaden circles” of Big Ben’s chimes send ripples through the air. Past events ripple over time and influence current thoughts and actions, alternatives not taken still weighing on characters. The passing car of someone important leaves “a slight ripple” along Bond Street. The wave imagery also occurs in rhythmic descriptors, whether a “flow of the sound”, a pulsing of the he heart, or the bustle of London. Woolf’s style even takes on a rhythmic nature, repeating phrases close together as well as expressions appearing many pages apart. There is a constant feeling of flow, whether in imagery or style.

Shakespeare appears often in the book, with references to Cymbeline, Antony and Cleopatra and Othello in this section. Cymbeline is especially telling, not just in the reference to death, but the nature of the play itself with the multiple disguised characters resolved by the many revelations at the end. The play resonates here because many characters have trouble recognizing themselves and/or others. Clarissa, claiming that “she would not say of herself, I am this, I am that”, does precisely that. Septimus, suffering from shell-shock and focused deep within his mind, does not recognize himself or others (mistaking Peter for his friend Evans as one example). Peter, able to examine Clarissa dispassionately at times, is unable to take the full measure of himself or others. He constantly measures his success or failure through the eyes of others. It becomes clear early on that self-assessments cannot always be trusted, nor can opinions about other characters be accepted at face value. Even the recollections are suspect, questioned by even those doing the reminiscing. The choices for quotes or allusions from Shakespeare also provide irony—Richard’s ideas about reading Shakespeare’s sonnets, for example. The mention of Antony and Cleopatra and Othellosets a sour tone for the possibility of the book’s couples.

Married life and relationships in Mrs. Dalloway are presented as less than nurturing alliances, but the characters’ thoughts are not always supported by their actions. Rezia muses “To love makes one solitary”. She has chosen a life with her husband away from her original home and family, yet his growing madness is what isolates her and not her departed love. “Every one gives up something when they marry” Rezia thinks, but that is the nature of intimate relationships. The relevant questions are how much of “something” do they give u and how willingly. Peter’s thinks that “one of the tragedies of married life” was that one spouse had to see through the eyes of the other, in effect losing the self. Clarissa even refers to love as “that monster” in response to Peter’s confession of loving a married woman. Marriage comes in for a brutal evaluation—as with many Modernist texts, Mrs. Dalloway questions the utility of society’s institutions to give meaning or assistance in the modern world. It is interesting to focus on the utility of marriage for Clarissa as well as her thoughts on her husband. The imagery of her room as a nunnery and Clarissa as a nun highlights her asexuality.

Yet she was not always that way, the kiss she receives from Sally Seton is responsible for “the most exquisite moment of her whole life”. While she burned with excitement and ecstasy for part of that summer in Sally’s presence, that flame was soon extinguished. Clarissa apparently still has some longings toward other women but it seems to be more akin to her reading memoirs than anything sexual. The changing nature of people over time is constantly highlighted. Socialist rhetoric gives way to traditional roles. Revulsion at being called a “perfect hostess” yields to planning and hosting perfect parties. Grand schemes to achieve great things are replaced by small-scale acts of kindness or assistance. While it is tempting to wonder why things turned out the way they did, why Clarissa married Richard instead of Peter for example, I think that approach can lead the reader down a blind alley. More important is what did happen and the associated ripples through time, following the choices made and their subsequent impact.

There are many other themes and motifs in this first section but I will try and cover them in other posts: madness and man’s essential nature, generational differences, freedom, flowers, nationalism, looking but not seeing, and some more I’ve forgotten over the course of writing this epic-length (for me) post… 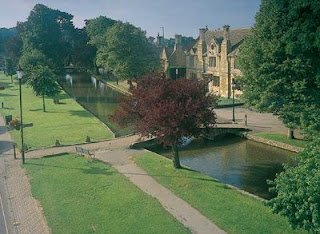 The Windrush River through Bourton-on-the-Water
Picture source
Posted by Dwight at 3:46 PM