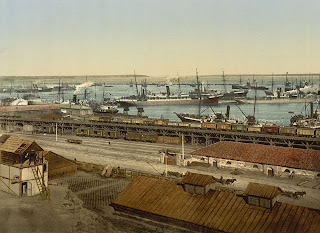 Babel’s stories of life in Odessa, or more properly in the Moldavanka neighborhood, were published starting in 1921 and continued into the 1930s. Jan Dudas' recent pictures of the district can be found on Flickr here. If possible, these works feel more direct than The Red Cavalry stories, entire tales sometimes couched in single sentences. The repetitive style Babel sometimes employs works to good effect in these tales, creating a rhythm in the reading that matches the rhythm of life he is relaying. And what a life it is—gangsters, brothels, and smuggling all taking place with flamboyance and élan. The Jews portrayed in these stories don't fit any stereotype that Babel uses in some of his other works.

While I’ve seen some reviews of these stories criticizing the romantic nature Babel used, I did not get that feeling at all. Babel’s irony is on full display in these tales. There is not quite as much ambiguity here as in The Red Cavalry stories, although you are still not quite sure how the narrator feels about these characters. At times there is sort of a wistful “they don’t make ‘em like that anymore” air, looking back as if to a sort of golden age. The humor walks a fine line between travesty and farce, or maybe blurs the two together. Yet Babel pulls no punches—as I read more about these characters the less I liked them.

Even with that ultimate dislike, Benya Krik (the embodiment of chutzpah) is an incredible literary creation. If you can read only two of Babel’s stories, I would recommend “How Things Were Done in Odessa” and “The King”, both of which I’ll quote from liberally. I wanted to write a lot in this post since I enjoyed these stories so much, but I’ll let Babel speak for himself. Hopefully these excerpts will spark some interest if you are unfamiliar with his work. In “The King”, the wedding feast of Benya’s sister is described. A new chief of police plans to raid the wedding but Benya’s henchmen set the police station on fire just before the raid can take place. And what a wedding feast they had:

For the dinner at this wedding, they served turkeys, roasted chicken, geese, gefilte fish, and fish soup in which lakes of lemon shimmered like mother-of-pearl. Above the dead goose heads, flowers swayed like luxuriant plumes. But do the foamy waves of the Odessan Sea throw roasted chickens onto the shore?

On this blue night, this starry night, the best of our contraband, everything for which our region is celebrated far and wide, plied its seductive, destructive craft. Wine from afar heated stomachs, sweetly numbed legs, dulled brains, and summoned belches as resonant as the call of battle horns. The black cook from the Plutarch, which had pulled in three days before from Port Said, had smuggled in big-bellied bottles of Jamaican rum, oily Madeira, cigars from the plantations of Pierpont Morgan, and oranges from the groves of Jerusalem. This is what the foamy waves of the Odessan Sea throw onto the shore, and this is what Odessan beggars sometimes get at Jewish weddings. They got Jamaican rum at Dvoira Krik’s wedding, and that’s why the Jewish beggars got as drunk as unkosher pigs and began loudly banging their crutches. … But the peak of their [the gangsters] ecstasy came when, in accordance with ancient custom, the guests began bestowing gifts on the newlyweds. The synagogue shamuses jumped onto the tables and sang out, above the din of the seething flourishes, the quantity of rubles and silver spoons that were being presented.

The introduction of Benya Krik comes when you learn of his marriage (an aside: two completely different wedding stories to different women are presented in these stories which I was unable to reconcile). In this instance, Benya is robbing a rich man when he catches sight of his daughter. Two days later Benya returns the money and asks for her hand in marriage, her father understanding the question is a formality since the gangster gets whatever he wants. The story ends the next morning as the guests have left the feast. Dvoria, forty years old and suffering from goiter, is “edging her timid husband toward the door of their nuptial chamber, looking at him lustfully like a cat which, holding a mouse in its jaws, gently probes it with its teeth.” This was one of the rare instances I felt sorry for a literary character.

“How Things Were Done in Odessa” tells of Benya’s entrée into the gangster life and why he rose to the top. The first job Benya was given was to rob Tartakovsky, the richest Jew in Odessa and nicknamed “Yid-and-a-Half”. The robbery goes wrong, one of Benya’s henchmen shooting a clerk of Tartakovsky. Benya not only arranges to have Tartakovsky pay for the funeral of the clerk (also that of the henchman who did the shooting) and provide a stipend to the boy’s mother, Benya gives a speech at the funerals. His apology to the clerk’s mother is what is priceless:

”If you want my life, you can have it, but everyone makes mistakes, even God! This was a giant mistake, Aunt Peysa! But didn’t God Himself make a mistake when he settled the Jews in Russia so they could be tormented as if they were in hell? Wouldn’t it have been better to have the Jews living in Switzerland, where they would’ve been surrounded by first-class lakes, mountain air, and Frenchmen galore? Everyone makes mistakes, even God.”

The problems of the Jews in Odessa compound when the Bolsheviks come to power, poignantly relayed in “The End of the Almshouse”. But the story of “Froim Grach”, one of Benya’s trusted advisers (and his father-in-law in one marriage scenario), compares the gangsters of Odessa with the new Soviet state. Benya Krik misjudged those just rising to power, treating them simply as he would another gang. As Benya's henchmen are killed off by the state, Grach goes to see the local chairman of the Cheka (Vladislav Simen) in order to complain but he is killed as well. The implication is that there is a new sheriff in town, much more ruthless than Benya “the King". While Babel disappears inside his stories so that it is difficult to discern his views with certainty, I have to believe that Borovoi, an investigator from Odessa who knew the exploits of Froim Grach well, speaks for the author regarding the flamboyant characters of his stories:

”I know you’re angry at me, Sasha,” Simen said to him, “but you mustn’t forget that now we are the power, the state power! You must remember that!”

“I’m not angry at you,” Borovoi said, turning away. “It’s just that you’re not an Odessan, you can’t understand what the old man represented.” …

“Tell me one thing as a Chekist, as a revolutionary,” Simen said to him after a moment of silence. “What use would that man have been to the society we are building?”

“I don’t know,” Borovoi said, starting motionlessly in front of him. “I suppose no use at all.”

He pulled himself together and chased away his memories. Then, livening up, he continued telling the Chekists who had come from Moscow about the life of Froim Grach, about his ingenuity, his elusiveness, his contempt for his fellow men, all the amazing tales that were now a thing of the past.

Note: Jarrod Tanny, a Ph.D. candidate (as of mid-2007 at least) in the Department of History at UC Berkeley has a couple of online articles regarding the gangster life in Odessa. Yids from the Hood: The Image of the Jewish Gangster from Odessa can be found starting on page five of the linked newsletter. Also, his paper The Many Ends of Old Odessa: Memories of the Gilded Age in Russia’s City of Sin provides an analysis of Odessa's golden age myth.

Map of Odessa
(from German edition of Baedeker's Russland, 1892)
Picture source
Posted by Dwight at 2:41 PM

I just read my first story by Issac Babel-"Guy de Maupassant"-set in 1916 in St Petersburg, Russia-I was motivated to read his work by Frank O'Connor's remarks on him-it can be read online-I really liked it a lot and would like one day to read a lot more Babel-

Mel, glad you discovered Babel. I'll need to re-read that story after having read Bely's Petersburg recently...thanks for the reminder.

If you go into his Red Cavalry stories, I recommend reading all of them. It doesn't have to be all at once, but there is a cumulative effect from these stories.