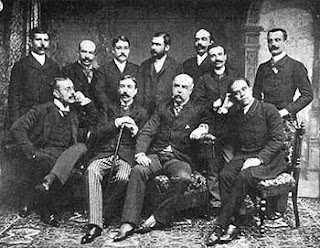 Os Vencidos da Vida (Those Defeated by Life)
Eça de Queirós in front row with walking stick
Photo from www.arqnet.pt
The end of the book comes with mixed feelings: satisfaction from reading such a wonderful novel, dissatisfaction with many characters that cannot develop, and reevaluation of everything that has happened to date.

The generational differences are still highlighted, but the light comes from a different angle. The young poseurs still act immaturely, with little morality or ambition. But the older generation comes under harsher scrutiny. The reader begins to wonder if “the old days” are like a Homeric golden age, myths elevating people and events to a grander scale than really existed. Ega’s admiration of Alencar comes with the realization that talent has sunk so low that the poet “takes on the proportions of a genius and a man of justice.” When Afonso dies, the family administrator rattles off the wealth of one of Portugal’s richest families. Yet what else did he create? A son that killed himself and a grandson that effectively killed Afonso—not that he is responsible for their failings, but that his reputation as an “old lion” and his legacy appear to be superficial. Eça de Queirós demonstrates a marked disdain for Portuguese aristocratic society, some no doubt due to his personal circumstances, but he elevates the questioning to include the myths and the costs of past accomplishments of individuals as well as country. Even the incest angle seems to reflect on the moneyed class as a whole, a group that amorally poaches each other’s spouses within their tight circle instead of seeking normal relationships.

Fortunately not all the characters are disappointing. Minor characters like Cruges and Craft are shown actually completing endeavors, contributing something of value. Of the main characters, Maria Eduarda was easily the most likable and sympathetic. For someone that had been repeatedly given a raw deal, she succeeded on several levels. She declines her opportunity for instant wealth, choosing instead security for her and her daughter.

Fortunately the wry humor continues in this section, such as the events leading to Dâmaso’s exile or his marriage to a woman that cuckolds him. Even the running gags persist, such as the comments about the divan in Carlos’ office or the cheese pastries from Sintra. Echoes of previous events continue (Carlos giving Eusèbiozinho another beating, for example) but one such event helps sum up much of the book's trajectory. Upon Carlos’ return to Lisbon after more than nine years’ absence, he invites his friends to dinner, repeatedly telling them to be on time. This request echoes the family administrator being rushed to the meal table when we meet Carlos as a child because “the young master doesn’t like to be kept waiting.” Despite Carlos’ generosity of money and home to his friends (things he can easily give without making an effort), causing his friends to wait because he is late to the reunion dinner encapsulates his ultimate disregard of anything outside himself.

Toward the end of the epilogue chapter, Ega and Carlos discuss philosophies of life. The reader can be sure Ega believes only two parts: his statement that there was a futility in all effort, and that “We have failed in life, my friend!” (A nice reference in the latter—the pictures in this post are of Os vencidos da vida, or “those defeated by life”, a group of Portuguese intellectuals including Eça de Queirós with a highly ironic name for an accomplished group.) Carlos lays out a fatalism he purports to have as his guide: “Desire nothing and fear nothing…allow that piece of organized matter called the ‘I’ gradually to deteriorate and decompose…above all, have no appetites… .” Quite a far cry from the self-absorbed libertine who continued to sleep with his sister even after he knew of her origin, and it would be nice to believe he has achieved those beliefs. He has desired nothing in his life because there was nothing he could not obtain until he fell in love with Maria Eduarda. It is clear he desires nothing now since he rationalizes that being “the rich gentleman who lives well” (full of inoffensive, pleasant fun which is ultimately insignificant) suits him well. It is clear the appetites remain and his acceptance of what happens is limited to the distant past.

Ega is unconvincing in his philosophy as well (except for the previously mentioned statements) but then he has lived his life with "appearance and deceit" as his maxim. “And what are we, if not romantics?” exclaimed Ega. “What have we been since we were at school…? Romantics, which is to say, inferior individuals ruled in life by feelings and not by reason.” Which is true to a certain point. He has already ruled out relying on reason since he flippantly contradicts himself all the time. But there are only a couple of times you can be sure that Ega has felt anything: his heartbreak at having “lost” Raquel Cohen back to her husband and his friendship for Carlos. Beyond those things it is difficult to point to anything substantive that Ega has felt other than doing things for his enjoyment. To drive home that nothing has changed with these friends despite their comforting philosophies, at the very end of the novel we have Ega touting:

”If someone were to tell me that down there the fortune of a Rothschild or the imperial crown of Carlos V were just waiting for me, and that it could be mine if I ran to grab it, I wouldn’t so much as quicken my step. No! I would maintain this slow, prudent, proper step, which is the only pace at which one should walk anywhere in life.”

Carlos agrees: “It’s not worth making an effort or chasing furiously after anything.” Even if you wanted to believe them, all of this is said as the two are “racing desperately” after a tram to take them to their reunion dinner.