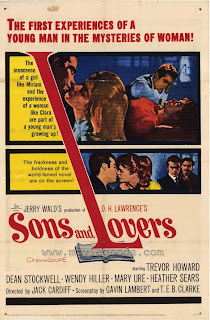 This movie might be a little harder to find for some since the DVD has not been released in the U.S. (or at least that regional format). Fortunately many inexpensive DVD players now can play any regional format.

The last two women did extremely well in difficult roles, and it was fun to see Dean Stockwell so soon after seeing him in the title role of Kim. Trevor Howard was tremendous as the frustrated and alienated head of the household.

The writers (T.E.B. Clarke and Gavin Lambert) took an interesting approach, starting with Paul in his late teens at the start of the movie. With that premise, scenes inevitably are going to be out of synch with the timing in the book. Yet for the most part they were still able to make most of it work. For example, the scene in Chapter 1 where Mr. Morel locks his wife out of the house, here we have Paul coming home and smashing a glass panel in the door to get in the house. The next morning, Mr. Morel tries to reconcile with the family and his wife acknowledges the emasculating impact she has had.

Yet some of the script’s inventions defy explanation. Having Arthur die in the mine (?!?!?) early in the movie just didn’t make sense. I know they were trying to stress Mrs. Morel’s wishes for her sons to attain middle class and avoid working in the mines, but there is enough material in the book to use without major alterations. The invented device of having a collector offer Paul a chance to study art in London, however, did an excellent job of highlighting the struggle Paul felt between staying with his mother and realizing his future.

There was a better sense of the relationship between Paul and his mother in this version as compared to the 2003 adaptation…not perfect but pretty good. And after Paul’s first time with Miriam, some of the “stillness” that Paul complained of after sex was reflected. Since the book made this ‘stillness’ (or sometimes described as a death-like feeling) a repeated point, it was nice to see it given recognition.

It was an interesting choice to film this in black and white. It is still visually beautiful, but obviously the colorful richness of nature conveyed in the book is lost because of that. The Nottinghamshire countryside still had much of the beauty of Lawrence’s time, even with the color limitation. It looked like this version had a strong influence on choices made in the 2003 TV adaptation.

Despite the inventions, conflations and reordering, the movie came reasonably close to capturing many of the strengths of the book. I think the movie is worth searching out and watching on its own terms as well as a comparative to the novel.

Movie poster from moviegoods.com
Posted by Dwight at 10:32 PM