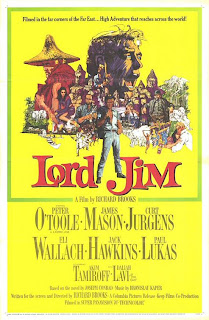 The 1965 movie version of Lord Jim, directed by Richard Brooks and starring Peter O’Toole as Jim is a visually beautiful film to watch. Other notables in the cast include James Mason as Gentleman Brown, Eli Wallach as an oppressive general, Dahlia Lavi as the Patusan girl (Jim calls her Jewel in the book) and Curd Jurgens as Cornelius. The screen version is markedly different in almost every detail, hanging on to the most general of outlines from the book.

The differences are too numerous to list, but I’ll point out a few of the changes or elisions. The physical descriptions of the German skipper of the Patna and of Doramin were so striking that it was disappointing to see actors not filling out their role (so to speak). Patusan is a much different place than Conrad described with a complete change in situations (the film version showing peasants overcoming an dictatorial general probably resonated more within the ‘60s). Stein is much more involved with Patusan and Jim. The reason for Gentleman Brown’s visit to Patusan is invented, as well as obtaining a radically different vengeance. Doramin gives Jim a chance to escape, while Jewel is supportive of Jim staying for his execution. I know it is unfair to compare, but at times I felt like I was watching Lawrence of Arabia set in the south Pacific.

So what changes worked well? Having the deserting crew of the Patna limp into port, only to see the ship safely there ahead of them was a nice touch. Brierly being much more animated in the courtroom helped explain his subsequent suicide. While the general was invented, his understanding of human nature was similar to Gentleman Brown’s, and he applied it just as ruthlessly. And the general’s disgust with Cornelius also matched Brown’s revulsion of the traitor.

Jim’s guilt at his verdict is portrayed well by O’Toole and heightened by flashbacks to the Patna. While the physical torture when captured in Patusan is a fabrication, it does heighten and contrast with his mental anguish. Watching Brown touch on Jim’s weaknesses was like watching a surgeon operate, manipulating him effectively. However, since Stein does not know of Jim’s past when assigning him to Patusan, we don’t get his view of romanticism (submitting to your destructive elements, swimming in them to stay afloat). The close of Marlow’s narrative is a good place to judge the success of the movie:

"And that's the end. He passes away under a cloud, inscrutable at heart, forgotten, unforgiven, and excessively romantic. Not in the wildest days of his boyish visions could he have seen the alluring shape of such an extraordinary success! For it may very well be that in the short moment of his last proud and unflinching glance, he had beheld the face of that opportunity which, like an Eastern bride, had come veiled to his side.

"But we can see him, an obscure conqueror of fame, tearing himself out of the arms of a jealous love at the sign, at the call of his exalted egoism. He goes away from a living woman to celebrate his pitiless wedding with a shadowy ideal of conduct. Is he satisfied—quite, now, I wonder? We ought to know. He is one of us—and have I not stood up once, like an evoked ghost, to answer for his eternal constancy? Was I so very wrong after all? Now he is no more, there are days when the reality of his existence
comes to me with an immense, with an overwhelming force; and yet upon my honour there are moments, too, when he passes from my eyes like a disembodied spirit astray amongst the passions of his earth, ready to surrender himself faithfully to the claim of his own world of shades.”

The movie does a fair job of capturing Jim’s egoism and his “romantic novel” successes. Because of the nature of cinema, we don’t have to worry about the reality of Jim’s existence…we see him for ourselves on the screen. Nor do we need Marlow’s loquacious impressions since experience everything for ourselves. I never quite got the feeling that Jim was satisfied (almost) while in Patusan, but in most other aspects of his character and responsibilities he generally follows the book. There was one moment in the movie where I felt exactly the same as did while reading the book—I wanted it to end with Jim’s success in Patusan, where it would be a “happily ever after” fairy tale. Alas, it was not to be in either case.

The invention of Marlow gave voice to stories that touched on life’s lessons and dangers. The movie version gets us almost to the same place, but in quite a different way.
Posted by Dwight at 3:39 PM