Text can be found here.

There is so much that can be written about with any book or short story, yet the hard part is choosing what to point out. While there are many more thoughts on the works I read, I’m trying to keep the posts relatively short compared to what I could cover. If you see anything else you would like to add, please do not hesitate to do so.

Considered by many to be one of Kipling’s best tales, this story revolves around Daniel Dravot and Peachey Carnehan, two unsavory former British soldiers. The narrator meets them separately, then together in his news office as they plan their trek to Kafiristan to anoint themselves kings. Carnehan shows back up in the office two years later with an amazing tale of their success and ultimate failure. The centerpiece of the story is Peachey’s spellbinding tale but knowing he is a misfit, how much of it can you believe? How much of it is true?

Dravot and Carnehan find themselves between cultures—neither accepted in English society (nor did they strive to be members of it) while despising the Indian raj, they differ from Wali Dad in “On the City Wall” since they are from Britain. One is Irish while the other is Scottish, countries previously absorbed by England. The irony, of course, is that they impose England’s imperialism and institute their own. I think it is easy to read too much into Kipling choosing those nationalities, yet that is what he chose so it’s definitely open to interpretation.

More interesting, to me anyway, is how two misfits in British society are able to ‘conquer’ and then rule Karfiristan. They recognize their weaknesses, drink and women, and swear them off in a contract in order to achieve their goals. As they rule, it is ironic how much they grow into their roles, doling out rulings and advice fair and appropriate for the situation. Comments Dravot: “It’s a hugeous great State, and I can’t always tell the right thing to do, and I haven’t time for all I want to do, and here’s winter coming on and all.” Part of Peachey’s reply: “I take it Kings always feel oppressed that way.” They feel the weight of imposing what they believe to be a superior culture upon another. The freedom the men embody (traveling where they want around India, extorting money and impersonating various roles) is counter to the role they desire. And in partway achieving their desired role, their behavior changes to reflect the many responsibilities of being a King.

In addition to the contract, there are the additional restrictions and burdens placed on them by Freemasonry. Since it turns out the natives have their own Masonic order, which gives the two would-be-Kings the additional leverage in appearing superior to them. Yet by breaking both the contract and order rules, they set themselves up for a spectacular fall. What enables them to raise themselves as Kings also facilitates their downfall.

The structure of the story is successful in adding to the overall feel. Just like the narrator, I found myself hanging on Peachey’s every word. Yet part of me wondering how much of this was Peachey making things up to elevate himself to appear a success. All of that is put to rest once he produces Dravot’s severed head, complete with gold crown.

I can see where Kipling’s comments throughout the story have put him on the bad side of historically judging previous generations by today’s standards. He clearly falls on the side of believing that England has much to offer and raise India up to a higher standard. But just as he commented poorly on the Captain in “On the City Wall” who treated natives badly, I see this story as a cautionary tale on the responsibilities he felt England owes to India. Deviating outside the overriding moral obligations will set themselves up for a deserved fall. I thoroughly enjoyed the story, yet I liked the ambiguity of “On the City Wall” more. Both are highly recommended, though.

I rented the 1975 film version of “The Man Who Would Be King” and found it extremely well done. Starring Sean Connery as Daniel Dravot, Michael Caine as Peachey Carnehan, and directed by John Huston, the movie follows Kipling’s story fairly closely. I found the deviations true to the direction of the story, as well as understanding the changes to successfully translate from page to screen. Christopher Plummer is Rudyard Kipling, a literal reading of the story’s author instead of a detached third-person narrator. Well written and well acted, I fail to understand why this wasn’t more of a success at the time or has been more recommended over the yeas since release. The chemistry between Caine and Connery is a lot of fun to watch. 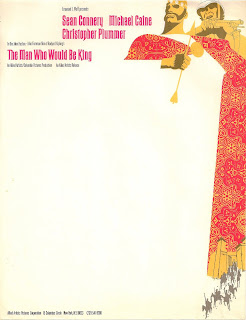 Picture source
"Now listen to me you benighted muckers. We're going to teach you soldiering. The world's noblest profession. When we're done with you, you'll be able to slaughter your enemies like civilized men.”


Extra note: for more on the historical figure who may have been a partial inspiration on Kipling's story, see the entry for Josiah Harlan.
Posted by Dwight at 7:38 AM