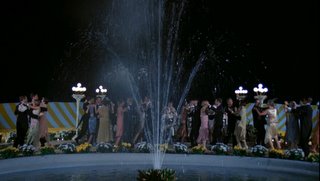 There was music from my neighbor’s house through the summer nights. In his blue gardens men and girls came and went like moths among the whisperings and the champagne and the stars.

The movie had high expectations when released in 1974, but was both a box office and critical disappointment. I enjoyed watching it, but found a few bad directorial choices compounded the weaknesses (as I see them) of the book.

The transition from novel to screen was going to be difficult. The book is laden with symbolism and themes, while capturing an era that is past. The screenplay was fairly faithful, with some themes emphasized and others completely dropped. Gatsby’s dream of capturing the past is pretty much as in the book—maybe not as deep but definitely developed in the movie. The East/West theme in the book was completely missing, however.

OK, first the good things. The film is a visual joy—sets and camera work are perfect, with many stunning shots. The raw hedonism of the moneyed ‘20s as portrayed in the book came to life for me. Sets, costumes, and music were all perfect.

Redford made a decent Gatsby, doing well with an enigmatic role. Bruce Dern was perfect as Tom, even though he didn’t have the “hulking” size that the book describes. The lack of physical size undermines some of his actions, but Dern does a good job making up for it. Sam Waterston moves well from innocent viewer to active participant. Karen Black made Myrtle even more of a repulsive character (although she didn't fit the physcial description either) and Scott Wilson made George an even more sympathetic character. Lois Chiles was note perfect as the cipher that was Jordan. 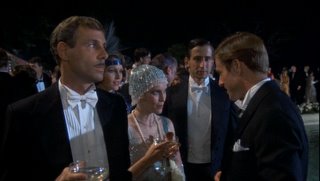 In a book that has so much symbolism in so many different ways, from colors to weather to nature and more, much was not included or had other things substituted. Gatsby’s dream was presented more as an individual pursuit than generalized into “the great American dream,” for example. I had no problem with much of the symbolism being toned down because I found it overwhelming in the book. When everything stands as a symbol, the effectiveness of such symbolism loses me.

A few scenes that I thought were enjoyable:
* The preparation for the party at Gatsby’s place was overwhelming, as the sheer volume of things consumed was monstrous. The liquor bottles being carried in the produce crates was a nice reminder of Prohibition. The party itself was pure revelry.
* Redford’s face as he shows off his opulent house to Daisy captured Jay’s feelings perfectly, feeding the dream of making her love him again. This is followed by a great scene of Jay and Daisy dancing around a single candle.
* The relationship between Nick and Jay was played very well—stiff and formal at first, much chummier and almost a true friendship by the end.
* There is a nice additional scene in the movie, with Tom Wilson looking out at the T.J. Eckleburg (with ‘oculist’ misspelled for some reason) billboard while he talks about God.
Gatsby’s business dealings (particularly with Meyer Wolfsheim) are hinted at very well, even though the bond swindles are shortchanged.

On to the things I didn’t like about the movie. The relationship between Nick and Jordan is almost completely lost. I felt that played a key part in understanding Nick’s relation with the shallowness and amorality lifestyle. You see them together, but it is never developed. There is more shown between Daisy and Nick than with Jordan.

In staying so true to the book, the words and actions sometimes felt forced and wooden. What reads well doesn’t always translate well visually. And even sometimes it didn’t read well…Gatsby reaching out to the green light, for example. That just read awkward, and Redford did what he could with it. I would have enjoyed more adaptation at times that would have made a better visual impact. 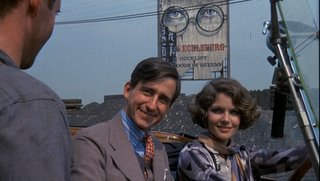 But above the gray land and the spasms of bleak dust which drift endlessly over it, you perceive, after a moment, the eyes of Doctor T. J. Eckleburg. The eyes of Doctor T. J. Eckleburg are blue and gigantic—their irises are one yard high. They look out of no face, but, instead, from a pair of enormous yellow spectacles which pass over a nonexistent nose.

I was disappointed by the introduction of Gatsby in the movie. The formal invitation to Nick to meet him in his office, while effective in showing some of the darker side of Gatsby (an armed butler, for example), misses the casual “I’m Gatsby” revelation during the party. It starts the relationship between Jay and Nick off on a different and awkward note from the book, and missed the tie-in of both characters being in the same place during the war.

The biggest offense to me, however, was the way Mia Farrow played Daisy (I’m assuming under Clayton’s direction). Daisy in the film is almost like a caricature of Daisy in the novel. Shrill, flighty, and overly shallow, it begs the question of why Gatsby (and Tom, and anyone else) would ever see in her. Much less focus your energies on obtaining her. You realize in the book after a while that she doesn’t deserve the idolatry Gatsby has given her, but the movie Daisy is grating from the first scene. I would have loved to seen Faye Dunaway in this difficult role and not have Daisy played so shrill. Ultimately that was the part of the movie that disappointed me the most, since it undermined much of the motivation of the characters.

Overall, I still recommend the movie, especially for the visual and musical beauty. While probably not doing full justice to the book, it is still rewarding. I’d love to hear how others feel about the movie, or if they have seen other versions of The Great Gatsby. 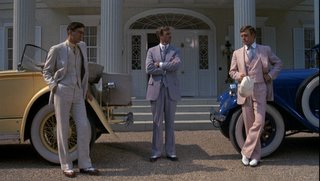 They went up-stairs to get ready while we three men stood there shuffling the hot pebbles with our feet.
Posted by Dwight at 12:52 PM

Email ThisBlogThis!Share to TwitterShare to FacebookShare to Pinterest
Labels: Movies, The Great Gatsby