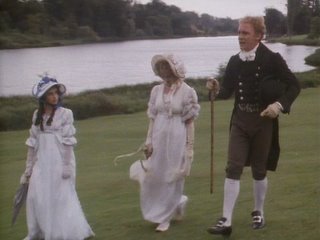 I watched the BBC production of Northanger Abbey this weekend and, while enjoyable, I found it a little underwhelming. While some of the story line is faithful to the book, much is missing. The biggest loss is the lack of irony and playfulness. I was happy to see the concerns about money and dowries more explicit than in the book, though.

Peter Firth is the only name I recognized (he plays Henry Tilney). His was probably the best drawn character in this adaptation. His anger at Catherine for assuming his father had something to do with his mother’s death was palpable. The difference between Henry’s worldly understanding and Catherine’s innocence is captured very well. You get a definite sense that he is interested in Catherine, which is kept a little ambiguous in the book.

I expect some differences in adapting to the screen, but there were some wholesale changes that undermined the book: I don’t recall any mention of gambling in the book, yet that is mentioned for one of General Tilney's concerns about money. Eleanor sees a poor man behind the General’s back. There is an additional character thrown in that serves no purpose. Catherine burns The Mysteries of Udolpho after Henry reproaches her for her assumptions (well, that might be a nice touch). Most troubling of all to me was Catherine’s flights of fantasy when reading her gothic novels—definitely a rape fantasy. I know that is one element in the gothic novels, but that isn’t all.

Yet there are some good things: Henry confronting the General after the latter sends Catherine home (only alluded to in the book, I believe). A scene is shown of the characters at the baths in Bath, while probably not completely historically accurate (mixing of the sexes, for example) is nice to see. The period costumes and music add a lot, although the original music sounds like it could be from a Skinamax production. The scenes around Bath are beautiful—the best feature of the movie.

I don’t recommend this version’s adaptation, unfortunately. My wife passed by and said "This looks like a bad Masterpiece Theatre movie." Yeah...that was the feeling.

According to the IMDB.com message boards, there are versions of all Jane Austen’s novels upcoming: “The film will be shown in England on ITV in 2007 as part of their Jane Austen season, and in the US on PBS' Masterpiece Theatre in November 2007 as part of the Jane Austen Festival.” I hope this version of Northanger succeeds. Some casting for this movie as it stands now: Catherine Morland - Felicity Jones; Henry Tilney - JJ Field; Isabella Thorpe - Carey Mulligan; Eleanor Tilney - Catherine Walker; Director - Jon Jones.
Posted by Dwight at 10:20 AM