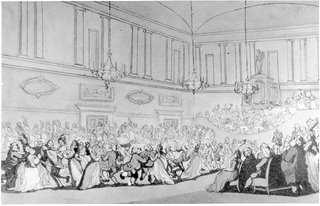 The Wikipedia entry on Bath, England is useful to see the setting of over half the book.

From the Celts who founded it to the Romans who turned the springs into a spa, Bath became a social center in the 18th century. By the time the book was written, the social aspect of Bath was in decline as the wealthy began frequenting seaside resorts like Brighton. Richard Nash was responsible for the renaissance of Bath in the 1700s, and his requirements posted in the Pump Room make you wonder how raucous the atmosphere originally was. And some of the requirements are delightfully mean (see #8):

1. That a visit of ceremony at first coming, and another at going away, are all that are expected or desired by ladies of quality and fashion—except impertinents.
2. That ladies coming to the ball appoint a time for their footmen coming to wait on them home, to prevent disturbance and inconvenience to themselves and others.
3. That gentlemen of fashion never appear in a morning before the ladies in gowns and caps, show breeding and respect.
4. That no person take it ill that anyone goes to another’s play or breakfast and not theirs; except captious by nature.
5. That no gentleman give his ticket for the balls to any but gentlewomen. N.B.—Unless he has none of his acquaintance.
6. The gentlemen crowding before the ladies at the ball show ill manners; and that none do so for the future except such as respect nobody but themselves.
7. That no gentleman or lady takes it ill that another dances before them—except such as have no pretence to dance at all.
8. That the elder ladies and children be content with a second bench at a ball, as being past or not come to perfection.
9. That the younger ladies take notice how many eyes observe them.
10. That all whisperers of lies or scandal be taken for their author.
11. That all repeaters of such lies and scandal be shunned by all company; except such as have been guilty of the same crime. N.B.—Several men of no character, old women and young ones of questioned reputation, are great authors of lies in these places.

Ironically for this group, much of the movie Vanity Fair was filmed around Bath. The images shown are from Thomas Rowlandson's satiric "The Comforts of Bath" (1798). I can not find all the watercolors in one online place, but seven of them can be found here. 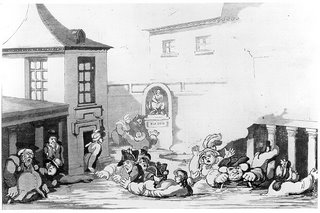