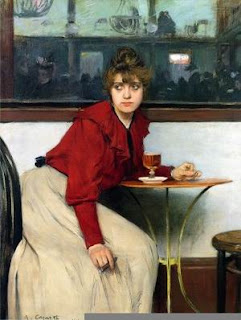 I seem to have misplaced a week of my life...probably the combination of a brutal head cold and long stressful work days. In trying to get caught up on what others have posted I found The Neglected Books Page's comments on Fortunata and Jacinta by Benito Pérez Galdós, calling it "The Greatest Novel You’ve Never Heard of". Well, now you've heard of it--read the comments at the above link for a good overview.

In another online life I had a personal finance blog, although I included anything I found interesting. About six years ago I started reading this book and enjoyed it so much I had three posts on it. I still think it has one of the most memorable introduction of a character I've ever run across. If you're looking for a good meaty novel to read this year (I'm especially thinking of those that tackled The Maias recently), I highly recommend Fortunata and Jacinta. I can't speak to the different translations other than to say I have the Agnes Moncy Gullón version and it is as lively as advertised.

I'll repost two excerpts from my earlier posts on this novel to give an additional flavor of Galdós' style. The setting for the first quote, as I initially wrote about it: the following takes place as Juanito Santa Cruz and Jacinta return from their honeymoon. During the trip, Jacinta has badgered Juanito (nicknamed ‘the Dauphin’) to reveal details of his pre-marital tryst with Fortunata. Juanito grudgingly reveals facts little by little until one night, extremely drunk, he pours out everything that happened between them.

Jacinta let herself be caressed. She wasn’t angry. But in her soul, a phenomenon very new to her was taking place. She felt two different feelings shuffling, superimposing themselves, one, then the other. Since she adored her husband, she was proud that he had scorned the other woman for her. This pride is primordial and will always persist, even in the most perfect of beings. The other feeling stemmed from the virtue underlying her noble soul, and it inspired her to protest against his having abused and pitilessly abandoned the unknown woman. Try as he might to deny it, the Dauphin had abused humanity. Jacinta could not pretend that he had not. The victory of her vanity didn’t prevent her from seeing that underneath the trophy lay a crushed victim. Perhaps the victim did deserve it; but whether the woman deserved her fate or not was not Jacinta’s concern, and on the altar of her soul there was a tiny flame of compassion burning.

The second excerpt stands on its own:

Dona Lupe matched the image in her nephew’s mind perfectly: she was sensible, reasonable, she cast a somewhat skeptical eye on human weaknesses, and she was capable of forgiving insults and even abuse; but as for a debt, she never forgave a debt. There were two different people in her, the woman and the money lender. Whoever wanted to be on good terms with her and enjoy her friendship had to be sure to keep her two natures separate. A mere promissory note, made out and signed in the most cordial manner conceivable, was enough to convert the friend into a mortal enemy, the Christian into an Inquisitor.

This lady’s dual personality had an external mark on her body, a fatal sign and a work of surgery which in this case was an accusing and just science. One of Dona Lupe’s breasts was missing; it had been removed because of a tumor while her husband was alive. Since she took pride in her good figure (she even wore a corset around the house), she substituted for her missing part a well-made ball of raw cotton. Fully clothed, she appeared to have a nice figure, but underneath her clothes only half of her bosom was flesh and blood; the other half was insensitive, and a dagger could have been driven through it without causing her any pain at all. Her heart was just the same—half flesh, half cotton. The type of relationship she had with a person determined which half would predominate. When a promissory note was not involved, dealing with that lady was a pleasure, but whoever was forced by circumstances to owe her money had something in store for him.

This novel has long been on my list; thanks to you and to Neglected Books, it's now in the post making its way towards my mail box.

You are right that this is the logical place to go after Eça de Queiros. I think I will need a break, though, before tackling the Pérez Galdós mountain.

Those are some appealing excerpts.

Neglected Books said "And there are countless descriptions of a large and complex city in the midst of social and political changes." You'll be able to picture Madrid in detail before you finish the book. It's a straightforward read, but hopefully the excerpts show how rich it can be. Looking forward to seeing others discover this book.

The other Spanish novel of similar era that I bought about the same time is La Regenta by Leopoldo Alas. And I hope to read another Galdós--too much in my TBR pile before I even factor in recent discoveries!