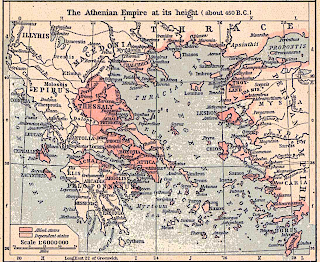 This post looks at the end of Book Two (Chapters 66 – 103), covering from Pericles’ last speech to the end of the third year of the war. All quotes come from the Thomas Hobbes translation.

While there aren’t too many “high level” events in this section, there are some indicators for the direction of the war. In Thrace, Athenian ambassadors capture Spartan envoys that were headed to the Persian king to request funds and help in the war. Upon their conveyance to Athens, the Spartan envoys were killed without a trial, their bodies simply tossed into a pit. The Athenians said they were justified in such action because the Spartans had been killing all non-Spartan merchants (Athenians, their allies, or neutral parties) found on the seas. Thucydides notes the Athenians were afraid of Aristeus, one of the Spartan envoys, who had generated much mischief against the Athenians. The violence continues to intensify on both sides, finding justification where they can.

The Athenian siege of Potidaea ends in these chapters as well, taking over 2 years and costing quite a bit of Athenian money. The Athenian generals present less than generous terms to the citizens of Potidaea, but they accept them and leave the city. “But the people of Athens called the commanders in question for compounding without them; conceiving that they might have gotten the city to discretion”. Two points here—the first concerns the answerability of the generals to the Athenian assembly, who can second-guess and criticize at their leisure. The second point, tied in with the first, shows that politics can influence the citizens’ oversight. There is no mention of penalties or censure toward the generals which, if they exceeded their authority, something should have been done. How much of the generals’ indictment was aimed at Pericles, his strategy, and his supporters?

At the beginning of the third year of the war (429BC), Sparta attacks Plataea instead of invading Attica (maybe to avoid where the plague had been the previous year?), claiming that they are freeing Plataea from Athens. A siege and countersiege ensue, something that would have made Tristram Shandy’s Uncle Toby very excited to read and model. In addition to the siege, additional battles were taking place throughout the general area. Athens focused on the area in the north (the Chalcidice) since the fall of Potidaea didn’t curtail the rebellion against Athenian control in that area. Spartolus, near Potidaea, saw factional strife embroil their city in the war as the democratic faction asked Athens for help.

The Spartans put together a fleet, engaging the Athenaian fleet (led by Phormio) in the Crisaean Gulf (Gulf of Corinth), but are overwhelmed. The Spartans reinforce their fleet with ships and new leaders (one of which was Brasidas) and engage the Athenian fleet again. Phormio had asked Athens for additional ships but those reinforcements had sailed off to another front first. The Spartan fleet initially defeat the Athenians but an accidental sinking of a merchant ship by the Athenians threw the Spartan ships into disarray. Phormio’s coolness under fire saved the day, even when dramatically outnumbered.

The Spartans contrive a bold and unexpected plan to attack the Athenian port city of Piraeus, but their delay when stopping to attack the nearby island of Salamis gives the Athenians time to set up a defense. Thucydides believed that Spartan timidity in attacking (delay, then refusing to meet the Athenian defense) cost them a victory at Athens’ doorstep. The Spartan inexperience on the seas shows in these early battles.

With battles and revolts happening across Hellenic cities, it’s not surprising that areas on the edges of Greek influence would initiate conflict. Sitalces, king of Thrace, declares war on Macedonia (whose king, Perdiccas, we’ve already met) and the Chalcidice area. Thucydides goes into detail on the Thracian empire, in particular its wealth and strength. As Sitalces' army marches to Macedonia it grows until it reaching at least 150,000 men. The Macedonians cannot directly face such a force so they retire to their walled town and harass the Thracians with their expert cavalry. The Athenians were supposed to send some of their fleet to assist Sitalces but they fail to arrive, probably because of the other conflicts in which they are engaged (and perhaps because they are smaller in force due to the plague). As the Thracians run out of provisions, Sitalces’ nephew Seuthes counseled him to retreat. Unknown to Sitalces, Seuthes had been promised Perdiccas’ sister (and dowry) in marriage, which he collected after the Thracians left. Phormio makes an expedition to Acarnania (eastern Greece) to ensure their fidelity to Athens, but returns home frustrated in some of his objectives.

This ends the third year of the war (winter of 429/428BC) and Book Two. Pericles would have died by this time (sometime in the fall of 429 judging by Thucydides’ earlier comments) and I’m surprised the writer did not present more on his death and funeral. Athens has achieved moderate success on their limited outings, but staying inside the city walls and following their commitment to sieges has extracted a heavy toll. In addition, there are important developments that would cause them concern: the devastation from the plague, the cost of the war, Sparta reaching out to Persia for help, the growth of the Spartan navy, and the size and strength of nearby areas (such as Thrace and Macedonia). These concerns will collide with rebellious allies in Book Three, not necessarily to the benefit to either side...