The Lost Books of the Odyssey discussion 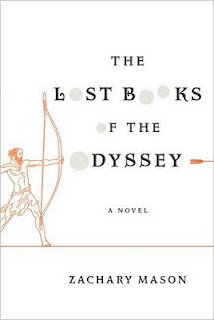 Steven Riddle at A Momentary Taste of Being gave this book a high recommendation and since I re-read The Odyssey lately (or so it seems to me) I thought I would check this book out from the library when it became available. I’m glad I did.

The Lost Books of the Odyssey purports to be just as the name implies—books or fragments that did not make it into the final version of The Odyssey. A chapter may have one item changed and the reader sees the cascading effect emanating from that change. Or the chapter may be told from the perspective of a different character in the epic, with or without changes. Or it may be a complete re-imagining of what “really” took place and how the epic we now read came into being. The scope isn’t limited to The Odyssey since many scenes from The Iliad and other mythic tales are included, but they usually come back to how the alternate version impacts Odysseus.

Like Mr. Riddle, I resisted the book at first. My wife asked, when I was starting the second chapter, what I was reading. “Einstein’s Dreams meets Homer,” was the easiest way for me to describe it (although I could have just as easily said Borges or Gaiman). Which it is, but at the same time it is so much more. Following what was common and contradictory between the different scenarios intrigued me and I, like Mr. Riddle, was won over by the sheer cleverness of the scenarios. My favorite chapter was The Iliad of Odysseus, a re-imagining of the Trojan War if Odysseus was a reluctant leader and warrior, yearning rather to be a bard. He gets his wish after taking matters into his own hands regarding Helen and sets the deciding conflict into motion. After performing as a bard for ten years around the Mediterranean, shaping the stories that became The Odyssey (becoming Homer in a sense), he returns home to Ithaca and enjoys hearing other bards sing of his alleged exploits. While these stories mock what really occurred, Odysseus rationalizes “What good is the truth when those who were there are dead or scattered?”, completely undermining the concept of kleos.

Zachary Mason, a computer scientist and mathematician here in Silicon Valley, has created alternate worlds where “Every event is the cause of myriad effects”. While written in prose, the economy of language and descriptive vocabulary can make the chapters feel like poetry at times. As Mr. Riddle points out, you can read this as deeply or lightly as you like, either way will provide much enjoyment.

For some quotes from the appendix of the first version of the book (the current publication by FSG could be called version 2.0), see the Math Fiction Site. Most reviews of the book, such as this one contain a history of the odyssey of the book’s publication. Whichever version is available to you, I recommend it.

Update: For a more detailed look at the book, see the review by biblioklept.

Update (5 Nov 2012): For more on the novel, different versions of the book, and excised chapters in the FS&G version read A Liar's Yarn: Storytelling in the Lost Books of the Odyssey by Yasuko Taoka. Highly recommended.